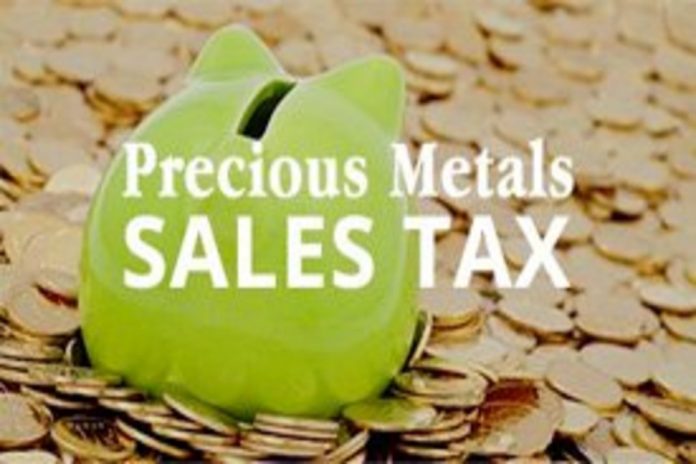 It’s bad enough when bait-and-switch “rare” coin dealers stick it to naive customers. But when one of those shady peddlers got involved with politicians in the state of Ohio more than 15 years ago, it was a major statewide scandal. And the fallout continues today…

Last week, state legislators in Ohio voted to repeal the state’s sales tax exemption on precious metals. Now, starting in October, residents there will generally pay at least 5.75% tax when purchasing gold and silver. Precious metal coins, rounds, and bars may be the only investments they hold that are subject to this additional cost.

Fewer Ohioans, likely, will buy physical bullion. Those who do must pay the state of Ohio for the privilege of investing in something other than conventional securities and real estate – the preferred assets of banks, brokers, and now, Ohio politicians.

Jp Cortez, Director of Policy for the Sound Money Defense League, fought on the front lines to defend the sales tax exemption for metals. He offered these comments:

“Under the dark cloud left by a rare coin shyster who stole tens of millions in Ohio taxpayer dollars a decade ago, the legislature revoked the sales tax exemption for gold and silver. We’re disappointed in this setback at the hands of tax-hungry politicians. But any tax revenues Ohio may gain will almost certainly be offset by revenues lost, as some business and coin conventions could flee the state. We hope to persuade Ohio’s legislature to fix this policy error in the future.”

The “dark cloud” Cortez referenced is a scandal dubbed “Coingate.” The memory of that debacle unfortunately still remains fresh in Ohio legislators’ minds.

The state had awarded a contract to Tom Noe, a rare coin dealer, to invest $50 million on behalf of Ohio’s Workers’ Compensation fund starting in 1998.

It’s worth noting that some of this shady activity is familiar, given the number of reports we’ve had from clients who have been victimized by other “rare” coin dealers over the years, particularly, the boiler-room operations that advertise with their celebrity spokesmen on TV.

Evidently state funds were used to purchase rare coins for at least three times what they were worth. Gross overpricing is the most common tactic in the rare coin business, especially when it comes to the high-pressure phone sales operations.

However, that probably isn’t the only cheat involved. The values mentioned above are for coins with an established grade at the highest end of the spectrum. The actual grade of the coins purchased with Ohio money may not even be known. The two coins were sent for grading and apparently went missing in the mail before arriving back.

What we do know is that no one who knows what they are doing would pay record prices for numismatic coins without a grade from one of the trusted grading services. And misrepresenting the grade of a coin is perhaps the second most common scam in the trade.

Ohio politicians made a big mistake when they got tangled up with a crooked rare coin dealer. Unfortunately, that wasn’t the end of the story.

Current legislators do not understand the mistake wasn’t investing in precious metals, per se. It was allowing that investment to be diverted into dubious “collectible” items.

The dark cloud generated by that fraud now obscures the fact that physical gold and silver was an excellent investment in 1998.

Had officials steered clear of collectible coins and instead purchased bullion, the returns for Ohio would have been great. Metals have vastly outperformed stocks since that time period, for example.

Instead, Ohio taxpayers lost most of that $50 million invested nearly two decades ago, and last week they lost the ability to buy gold and silver without paying sales tax.