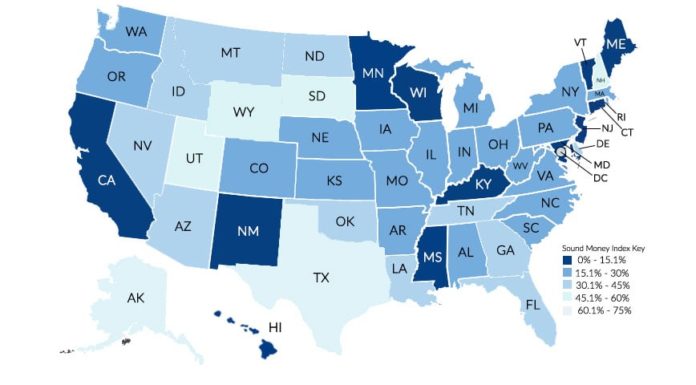 (Sound Money Defense League) Residents of Wyoming and South Dakota live in the most pro-sound money states in the U.S., according to the 2023 Sound Money Index released today.

While the nation faces staggering inflation rates and ongoing financial turmoil, the Sound Money Index ranks all 50 states on their policies in this area of growing relevance.

The biggest positive mover on the index this year was Tennessee, which jumped from 36th to 9th place. Meanwhile, Washington State plummeted from 7th to 34th place.

The 2023 Sound Money Index also includes a new 13th ranking criterion – Specie Tender Mechanisms. This category examines whether a state has created a system to remit and accept gold and silver for payment of fees and taxes.

On the negative side, tax-and-spend politicians in Washington State slapped a 7% capital gains tax on the sale of all assets, including precious metals, sinking the state’s ranking from 7th place to 34th place.

Among the worst states in the country on the 2023 index – Vermont, New Jersey, Maine, Kentucky, Mississippi, Wisconsin, New Mexico, and Hawaii – are states that continue to charge sales taxes on purchases of sound money, with many of those states also charging sales tax rates above the national average. 42 states now fully or partially exempt gold and silver from sales taxes, marginalizing these 8 states out on the fringe.

“As inflation rages on, the Sound Money Index holds states accountable for their policies impacting sound money. Forward-thinking policymakers are pursuing ways to promote and protect the use, sale, and purchase of gold and silver in their states,” explained Jp Cortez, Policy Director of the Sound Money Defense League.

“While inflation is a policy choice by the Federal Reserve and the federal government, states do not have to sit idly by while their citizens are fleeced,” continued Cortez. “States can and should enact policies to mitigate some of the damage wrought by the ongoing debasement of our money.”