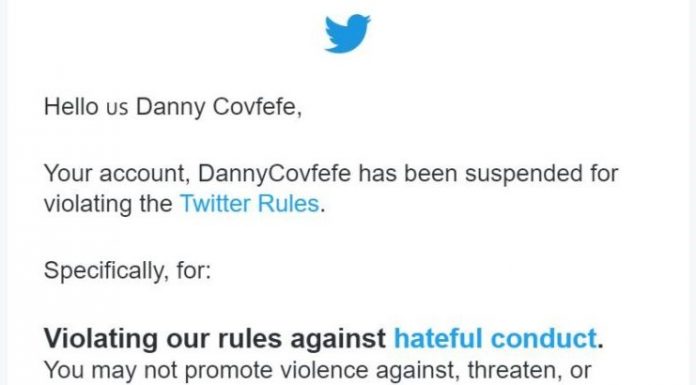 In a characteristic outburst, De Niro recently claimed that he would never portray President Trump in a movie, calling him a “nasty little b*tch,” as though implying the 76-year-old actor could be tapped to portray the 73-year-old Trump at some later date.

Social media users, noting that De Niro has a long history of making untoward comments regarding President Trump, took to Twitter to defend the president and deride De Niro, resulting in the ban of the Danny Covfefe account.

This, according to Twitter, constitutes “hateful conduct,” falling under the umbrella that stipulates users “may not promote violence against, threaten, or harass other people on the basis of race, ethnicity, national origin, gender, gender identity, religious affiliation, age, disability, or serious disease.”

It is not known what special group Twitter believes De Niro fits into, or if being an “angry little b*tch” is a “serious disease” in the eyes of Twitter.

As the Danny Covfefe account used the same language used by De Niro off platform, it appears Twitter’s rules – if enforced equally and fairly – would require the platform to now ban the veteran actor as well.