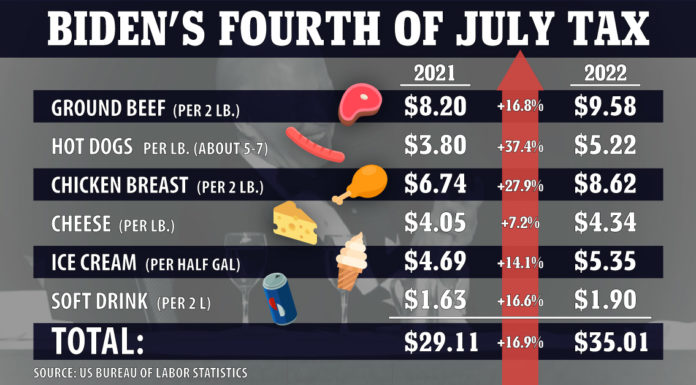 People can expect to pay at least 17% more for their July Fourth barbecues, according to an American Farm Bureau survey.

The bureau’s chief economist, Roger Cryan, noted that farmers are also suffering, and shouldn’t bear the blame for increased prices.

“Bottom line, in many cases the higher prices farmers are being paid aren’t covering the increase in their farm expenses,” Cryan said. “The cost of fuel is up and fertilizer prices have tripled.”

Ironically, a year ago the Biden administration was touting a measly $0.16 savings on 4th of July celebrations.

“Planning a cookout this year?” the White House tweeted. “Ketchup on the news. According to the Farm Bureau, the cost of a 4th of July BBQ is down from last year. It’s a fact you must-hear(d). Hot dog, the Biden economic plan is working. And that’s something we can all relish.”

Rep. Elise Stefanik, R-N.Y., however, was already seeing warning signs on the horizon.

“Apparently, no one at the Biden @WhiteHouse has been to the gas station recently,” Stefanik tweeted, noting that even at this time last year Americans were paying “the HIGHEST price for a gallon of gas since 2014 and a 42% INCREASE from last year.”

The White House did not tweet about the cost of a BBQ this year, but Stefanik did.

This Fourth of July will be 17% more expensive for families because of #Bidenflation. pic.twitter.com/yUInFhzroJ

Planning and paying for July Fourth celebrations is strained at more places than the grill; even the cost of fireworks has skyrocketed.

And like everything else, rising gas costs have made fireworks less readily available than in years past with Bidenflation forcing many cities to cancel planned fireworks displays for community gatherings.