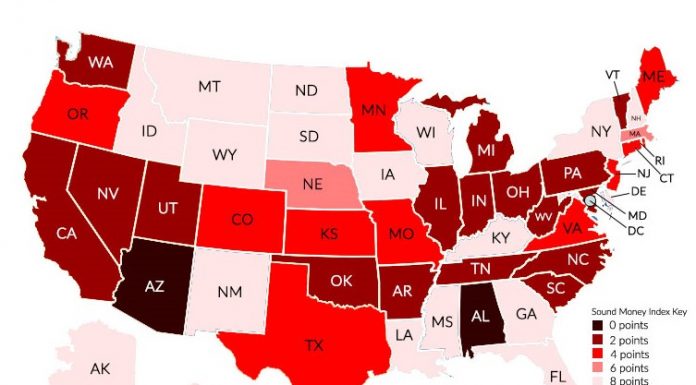 The Sound Money Index is the first index of its kind, ranking all 50 states using twelve different criteria to determine which states maintain the most pro- and anti-sound money policies in the country.

Wyoming, Texas, and Utah emerged as the best states on sound money in the nation, and South Dakota, Alaska, New Hampshire, and Washington are not far behind.

Maine, Tennessee, Ohio, and Kentucky joined Vermont, Arkansas, and New Jersey as the worst states on this issue.

“Federal policy and the privately owned banking cartel known as the Federal Reserve System are the root causes of inflation, instability, and currency devaluation,” noted Jp Cortez, Policy Director at the Sound Money Defense League. “However, there are steps states can take to protect their citizens from the ill effects of America’s unbacked paper money system, and many of them are taking those steps,” Cortez noted.

Click Here To Comment
Email
Print
Previous articleElephant in the Room: Why Nobody Talks About Ballooning Federal Deficits
Next articleBanks Mine More Data from Our Credit Card Purchases Than We Ever Knew