Wealthy Manhattan Woman Arrested for Rioting, Causing Over $100,000 in Damage 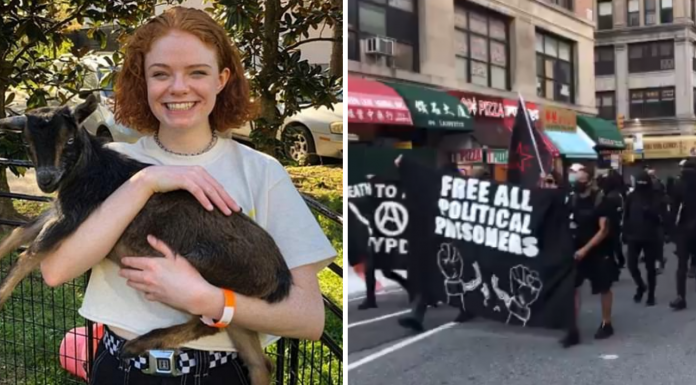 (The Post Millennial) New York City Police arrested the 20-year-old daughter of a wealthy Upper East Side family for causing property damage in a riot organized by an Antifa-affiliated and a black supremacist group in the city on Friday. The damage totaled over $100,000.

According to the New York Post, 20-year-old Clara Kraebber is among the eight people arrested at the scene, where an angry mob in the area of 24th street wrecked shop fronts. The mob began their march from Foley Square and, over the course of the next three hours, marched north, causing property damage wherever they went.

All across the city, store owners have erected plywood boards to protect their businesses due to the ongoing riots.

Kraebber’s mother is Virginia Kindred, a renown architect and the owner of Kindred Arch works, a Manhattan architectural firm. They specialize in designing public spaces like schools and businesses and have produced architecture for Columbia University and New York University.

Kraebber’s father, Markus Kraebber, is a professor at the Columbia University Department of Psychiatry.

In 2016 the Kraebber family reportedly paid $1.8 million for their 16th-floor apartment on East End Avenue…

The Antifa mob chanted “Every city, every town, burn the precinct to the ground!” echoing phrases from their cohorts in Portland and Oakland. Black-clad militants shattered storefronts on their way through Lower and Midtown Manhattan.

The mob also carried banners that read “Death to America.”