Transgender Industrial-Complex: The Money Behind the Lobby 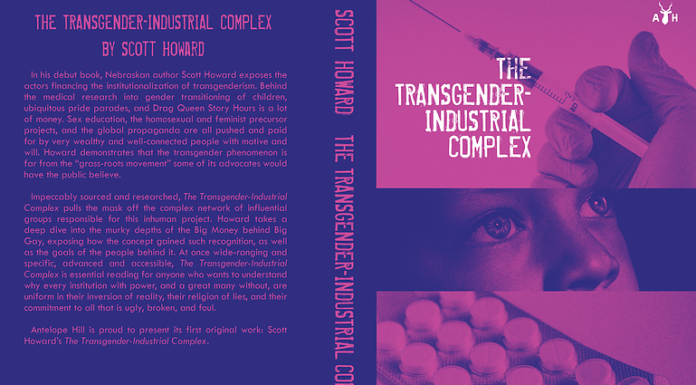 (National Justice) An upcoming book from Antelope Hill provides meticulously sourced insight into the corrupt institutions and wealthy financiers that have created and imposed the inorganic transgender movement on the West and beyond.

In The Transgender Industrial-Complex, a copy of which was provided to National Justice for review, author Scott Howard provides over 400 pages of mostly unknown names and groups who, largely over the last 20 years, have used their money to fund phony science, corrupt law, judges and politicians, disseminate disinformation, and organize often thuggish and violent activism to force mostly English-speaking liberal democracies to seriously debate whether men can get pregnant or children should be allowed to choose to take drugs and have irreversible “gender affirmation surgeries.”

Those who disagree on the grounds of ethics or science are marked for destruction.

Howard’s book is effective because its chapters focus on tracing the money, examining the history, and looks at how the European Union and Washington export transgenderism to other nations. It effectively packages the actual science on transgenderism, that it is nothing more than organized and well-funded delirium, in a highly readable format.

Just recently, the largest study ever conducted on transsexuals found that rather than being a biological flaw for man to correct through drugs and surgery, the lifestyle and practice of wanting to change your sex is merely a type of aggressive autism with psychiatric co-morbidities such as schizophrenia.

The Transgender Industrial-Complex is an authoritative tome that answers all of one’s questions behind an issue that induces confusion and befuddlement among the vast majority of people.

Gender ideology is not just a strange liberal fad. It is a pernicious attack on Western civilization by wealthy and powerful people motivated by equal parts mental illness and malice.