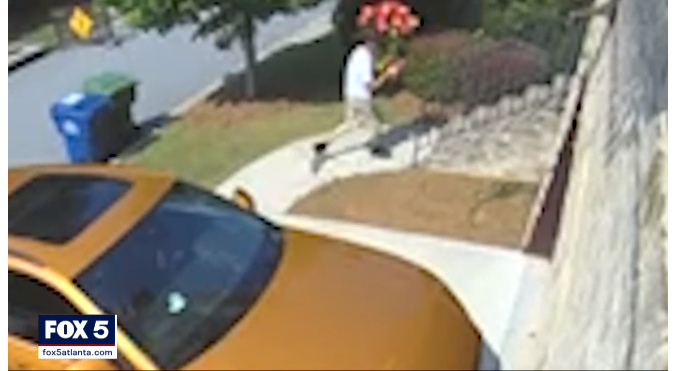 (FOX 5 Atlanta) Sabrina Wynn shared a home surveillance video on social media of the man she said attacked her after delivering flowers to her Buckhead residence. The 32-year-old mother of two said she was sharing her story to alert other women.

The Atlanta resident told FOX 5’s Deidra Dukes she is still concerned for her safety a month after the frightening encounter.

Wynn said the man knocked on the door of her home on the 900 block of Canterbury Lane in northeast Atlanta, with flowers in hand, the morning of August 11. He asked if she was Sabrina and told her he had a flower delivery for her.

“He said he can bring them in to lay the flowers down, they were pretty heavy.  I said, ‘Yes,’” said Wynn. “He came down, turned around, it looked like he had a gun in his hand. I then said like ‘What the ‘f— are you doing?’”

Wynn said the weapon the man was holding was a Taser.

“He turned around and shot it at me which I was confused. I’ve never seen a police Taser before so I was unaware of what was going on until I got tased,” Wynn said. “I got tased probably about 10 seconds until I ripped the things out.”

Wynn ran up the stairs to grab her gun and her two young sons. She said that’s when the man walked out of the house, got into a white delivery van, and drove off.