“Is Your State Destroying Your Money?” Asks 2020 Sound Money Index 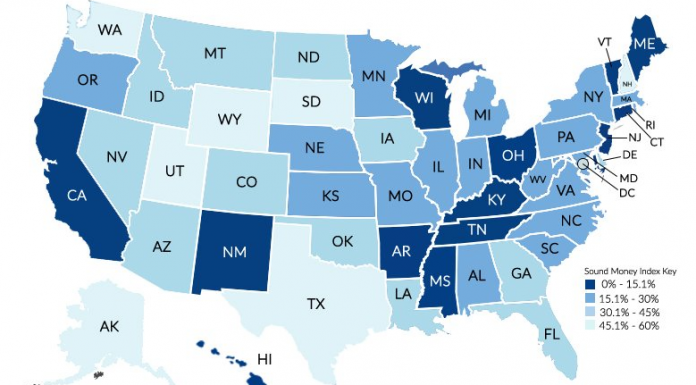 (Sound Money Defense League) Wyoming, Texas, and Utah are the three most pro-sound money states in the United States, according to the 2020 Sound Money Index.

Released today, the Sound Money Index is the first index of its kind and uses 12 different criteria to determine which states maintain the most pro- and anti-sound money policies in the nation.

Because a handful of Washington State politicians failed again this year in their attempts to impose sales taxes on purchase of the monetary metals, the Evergreen State joins South Dakota, Alaska, and New Hampshire in the fourth to seventh place range on the Sound Money Index.

Ohio fell to the bottom of the rankings last year after slapping sales taxes on gold and silver, but the Buckeye State made a minor comeback in 2020 when its government pension trustees decided to allocate five percent of retirement funds to physical gold.

Ohio joins Texas as the only two states in the U.S. known to allocate a percentage of state-held pension funds to physical gold, even though other pension trustees’ failure to own gold as financial insurance arguably violates their fiduciary duties as well as the “prudent man rule.”

“As politicians and central bankers continue to print trillions of unbacked pieces of paper in response to COVID, sound money has never been more important. Citizens in states that foster pro-sound money environments enjoy the benefit of being able to protect their wealth without onerous taxes and regulation,” said Jp Cortez, Policy Director of the Sound Money Defense League.

“However, many states are taking steps to protect their citizens from the damaging effects of America’s fiat paper money system,” Gleason noted.