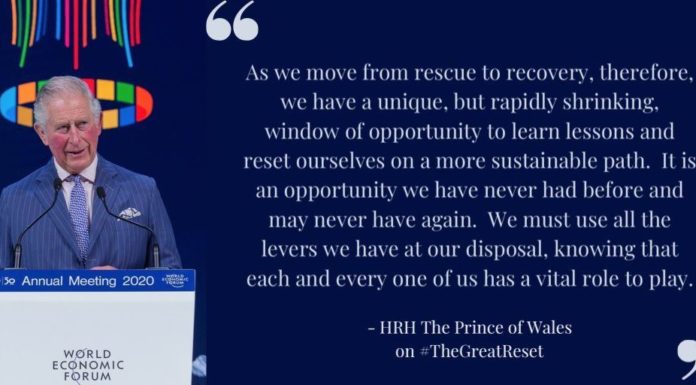 While the world mourns the death of Queen Elizabeth II, a glimmer of excitement, tempered of course by public grief, likely sparked deep in the collectivist heart of World Economic Forum founder Klaus Schwab.

Prince Charles ascended to the British throne on Thursday and become King Charles III. There is no date set for his official coronation, but it probably can’t come soon enough for Schwab’s WEF and its plan for a global Great Reset.

Along with ditching Princess Diana, the then-prince Charles practiced what Jordan Schachtel at The Dossier called “a life of disgrace, hypocrisy, and corruption.” Even worse for the rest of the world, Charles also became deeply enchanted with the WEF and its agenda of depopulation, climate alarmism and global elite supremacy.

The WEF acolyte kicked his support into high gear in 2020, when COVID provided a unique opportunity to begin laying a foundation for the WEF’s Great Reset.

Charles even let slip that President Joe Biden’s vaunted “Build Back Better” green boondoggle was part and parcel of the WEF’s global grab.

“#TheGreatReset initiative is designed to ensure businesses and communities ‘build back better’ by putting sustainable business practices at the heart of their operations as they begin to recover from the coronavirus pandemic,” the then-Prince of Wales tweeted.

— The Prince of Wales and The Duchess of Cornwall (@ClarenceHouse) June 3, 2020

“In order to secure our future and to prosper we need to evolve our economic model, putting people and planet at the heart of global value creation,” Charles said.

His pronouncements echoed “the collectivist language of those who have explicitly stated they wish to use environmentalism as an excuse to dismantle capitalism and its democratic systems of government,” according to Spectator Australia.

“Global value creation” is another euphemism for socialism, the Spectator reported. It also flies under the guise of radical ESG standards being pushed by the Biden administration, where companies are “encouraged” to comply with “Environmental, Social and Governance” dictums to advance a far-leftist ideology.

Embraced by the prince who would be king, during the 2022 Sustainable Finance Roundtable, Charles demanded a “war-like footing” to fight the evils of global warming by eliminating fossil fuels and other reliable energy sources, which has led the U.K. into a crippling energy crisis.

Charles touted his own Sustainable Markets Initiative that launched at the WEF’s Davos 2020, designed to “find ways of accelerating the transition of the global economy.”

“We need nothing short of a paradigm shift, one that inspires action at revolutionary levels and pace,” then-Price Charles said.