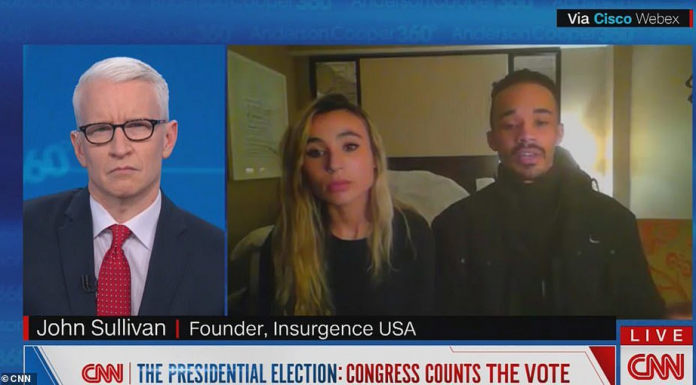 (The Post Millennial) Far-left rioter John Sullivan received $35,000 each from CNN and NBC for the Jan. 6 footage he recorded of Trump supporter Ashli Babbitt’s shooting death inside the Capitol building.

According to records filed in federal court, the Black Lives Matter militant, who is facing criminal charges by federal authorities for his alleged involvement in the Capitol Hill riot, was awarded $70,000 total from the two left-wing media outlets.

CNN’s Anderson Cooper featured Sullivan on his show in the wake of the riot to present his account as the self-professed heroic reporter who both witnessed and captured the female Air Force veteran’s death.

In addition to the invoices filed by Sullivan’s lawyers from the major broadcasters for rights to air his footage, the defendant also received $5,000 from Left/Right Productions and $2,500 from the Australian Broadcasting Corporation, the Daily Caller reported.

Sullivan’s legal counsel disclosed the payments as part of the 26-year-old Utah native’s argument that he was present at the time to “document and report” the event for journalistic purposes, not to incite or engage in violence…

The founder of Utah-based extremist group Insurgence USA maintains that he embedded himself among the pro-Trump mob to record the January breach of the Capitol building.

But an FBI special agent noted via sworn affidavit that Sullivan even admitted that he has no press credentials. The investigation failed to yield “any connection between Sullivan and any journalistic organizations.”

There are recorded examples of Sullivan agitating the crowd. When individuals climbed the wall to reach the plaza just outside the Capitol building’s entrance, Sullivan can be heard shouting on-camera: “You guys are f—ing savage. Let’s go!”

“We did this together. F— yeah! We are all a part of this history,” Sullivan stated in video evidence cited by the prosecutors. “Let’s burn this shit down.”