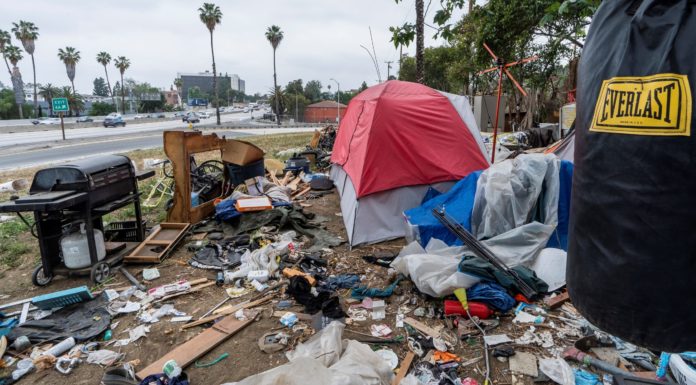 (Associated Press) The contest to become the next mayor of Los Angeles can be distilled into a single question with no easy answer: Who can fix this mess?

Tourists still flock to Hollywood’s Walk of Fame, the palm trees soar along Sunset Boulevard, and the Los Angeles Rams are Super Bowl champions. But in many ways the nation’s second most populous city feels diminished.

An out-of-control homeless crisis plays out on the streets daily, sometimes with deadly consequences. A rising crime rate — spotlighted by home invasions and smash-and-grab thefts at luxury stores — has contributed to a creeping sense of civic disorder. Miles of streets and sidewalks are crumbling.

Sexual harassment and corruption scandals have tainted City Hall. Two years after the start of the pandemic, many yearn for a return to normalcy that hasn’t come. Tellingly, a region once associated with stratospheric growth is losing population, in part from frustrated residents deciding a brighter future is somewhere else.

As voters in the city of 4 million people begin to assess a large, diverse cast of candidates to replace beleaguered two-term Democratic Mayor Eric Garcetti, at issue is whether LA might break from its liberal moorings and embrace a candidate with a strong emphasis on public safety. New York City has similar conditions, and last fall voters elected former police Capt. Eric Adams as their mayor.

What happens in New York, LA and other big cities can foreshadow the direction of national Democratic politics.

“These big cities are all Democratic strongholds, but they’re not monolithic,” said Raphael Sonenshein, executive director of the Pat Brown Institute for Public Affairs at California State University, Los Angeles. “At least in theory, this year has some open doors for candidates who are the most critical of the political structure and system.”

Last week was the deadline for candidates to enter the race. The primary is June 7. If no candidate wins a majority — which appears likely with more than two dozen people in the race — a runoff would be held in November between the top two finishers.

For now, the officially nonpartisan race is a scrum with no dominant candidate, though the leading contenders all are Democrats.

In a different year, the overwhelming favorite might be U.S. Rep. Karen Bass, a fixture in the party’s progressive wing who was on President Joe Biden’s short list when he was considering a vice presidential pick. Her election would be groundbreaking: She hopes to become the city’s first female and second Black mayor, after Tom Bradley, who held the post from 1973 to 1993.

Bass needs to build support beyond her congressional district. Her recently announced plans to get more police on the streets was a recognition of the unsteady times.

The entry into the race last week of billionaire Rick Caruso, a business-friendly, political centrist known for building high-end shopping malls, reordered the contest and will give voters a starkly different choice. With the ability to invest tens of millions of dollars of his own money into his campaign, the one-time Republican who recently registered as a Democrat is running as an outsider who wants to add 1,500 police officers. He faults those holding office for allowing the city to go badly off track.

But most voters know little about Caruso, and inevitable challenges come with being a white billionaire with a nine-bedroom mega-yacht in a diverse city with a yawning gap between rich and poor. Forbes magazine estimates his wealth at $4.3 billion. His campaign website introduces him as the grandson of Italian immigrants and a philanthropist with deep community roots who has served on several government commissions, including as president of the city’s Police Commission.

Residents “are scared,” Caruso said in a brief interview with The Associated Press. “They’re fed up. Can you imagine running a small business and you’re worried about crime, and you also have a (homeless) encampment in front of your business?”

Other candidates among a leading group include city Councilman Joe Buscaino, a former policeman pushing for an expanded police department; Councilman Kevin de Leon, a former state Senate leader and the most prominent Latino on the ballot in a city that is about half Hispanic; and City Attorney Mike Feuer, who has made gun violence a priority.

The widespread anxiety over unsafe streets shares some similarity to 1993, when LA voters turned to Republican Richard Riordan to lead the city in the aftermath of the deadly 1992 riots that erupted after four white police officers were acquitted of assault in the beating of Black motorist Rodney King. It also has parallels to New York City in the early 1990s, when the perception that crime was out of control helped usher in Republican Mayor Rudy Giuliani.

Los Angeles, however, is much changed from Riordan’s days. It’s more Latino, less white and more solidly Democratic — Republicans comprise only about 13% of voters, while Democrats account for nearly 60%, with most of the remainder independents who lean Democratic.

Homelessness is the most pressing issue. An estimated 41,000 people live on city streets, a figure roughly equal to the population of North Miami Beach, Florida.

In recent weeks homeless men with long arrest records were implicated in two killings — a 70-year-old nurse died after being punched in an unprovoked attack at a bus stop and a 24-year old graduate student was stabbed to death while working alone in a store. Advocates worried public outrage over the crimes would leave a vulnerable population more endangered, noting people living on the streets are far more likely to be victims of violence than perpetrators.

What’s needed is permanent housing that is not yet available, paired with health services for those with mental illness or chronic drug addiction, said John Maceri of the People Concern, one of L.A.’s largest nonprofits serving the homeless.

Also lacking: a system to get those units built quickly, and with accountability. “People who are in temporary housing are still homeless,” Maceri said.

To urbanist Joel Kotkin, a presidential fellow in Urban Futures at Chapman University who lived in LA for four decades, one of the long-running problems is the erosion of the middle class. It flourished for many years, fortified by unionized jobs in aerospace and entertainment.

“People came here, they bought a house, they raised a family, kids went to public schools,” he said.

Many of those jobs are now gone, and what’s left is a so-called a barbell economy of well-to-do residents on one end and the working class on the other.

“That whole middle sector of Los Angeles, which really was the great thing about L.A., that’s disappeared,” Kotkin said.