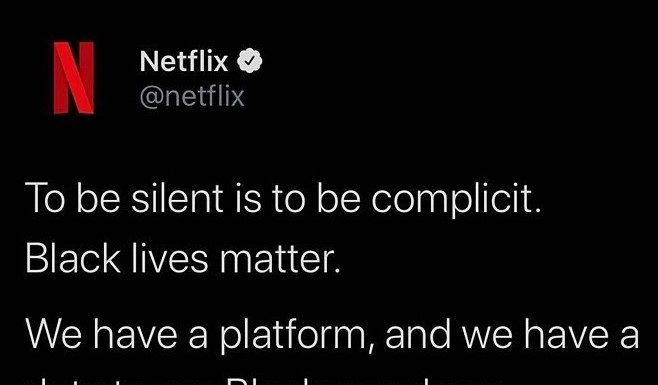 (Michael Barnes, Liberty Headlines) A corporate watchdog last week crashed Netflix‘s annual shareholder meeting and confronted its board of directors about its support for Black Lives Matter and the related protests that have led to nationwide riots and looting.

The group, known as the National Center for Public Policy Research, also confronted the online streaming giant’s top brass about its refusal to protect employees who might disagree with far-left wing politics.

“Netflix clearly has no idea about the origins or intentions of Black Lives Matter,” said Justin Danhof, general counsel and director of the NCPR’s Free Enterprise Project..

“If they do know the full story of Black Lives Matter and still support the Communist-inspired agitators, that’s even more abhorrent,” he said.

“Does Netflix CEO Reed Hastings remember when Black Lives Matter closed highways in Minnesota chanting vile phrases aimed at the police including ‘pigs in a blanket, fry ‘em like bacon’? I sure do,” Danhof explained on the record.

Danhof also cited the widespread looting of businesses, torched police vehicles, and the desecration of monuments, historic landmarks and churches—all of which Netflix refused to condemn.

“All sane people, including us at the National Center, condemn the killing of George Floyd and support black communities, but that’s not what the Black Lives Matter movement stands for,” he said.

Rice’s only known connection with video-streaming platforms, prior to her appointment to Netflix’s board, was her later-discredited scapegoating of a YouTube video, which she accused of starting the deadly uprisings at the US Embassy in Benghazi, Libya.

“Now it appears she is becoming increasingly embroiled, along with other members of the Obama Administration, in a Watergate-style scandal of massive election and post-election corruption,” he said, referring to the Department of Justice investigation into the FBI’s Russia-collusion conspiracy and the recent dismissal of charges against Rice’s White House successor, Gen. Michael Flynn.

“Given this, and Rice’s already deeply polarizing place in American life, has not the time come to cut ties with her?” Shepard asked.

Notably, Netflix investors voted to reject Rice as a corporate board member last year but she received the influential position anyway.

Shortly after Rice’s appointment, Netflix signed a multi-series development deal with the Obamas worth an estimated $50 million.

The deal was linked to a quid-pro-quo arrangement involving Ted Sarandos, Netflix’s creative content chief, whose wife, Nicole Avant, served as Obama’s ambassador to the Bahamas. Both were major Obama fudraisers and donors.

Shepard offered that perhaps Rice’s board seat was, likewise, tied to securing a Netflix-produced documentary about the Obamas. That film was released a year ago.

More recently, the platform streamed another documentary on former First Lady Michelle Obama’s experiences on the road last year while promoting her memoir.

Some have speculated that Michelle Obama may secretly be harboring political ambitions and that the Netflix programming the Obamas develop would be strategically timed to function, effectively, as campaign material while skirting campaign finance laws.