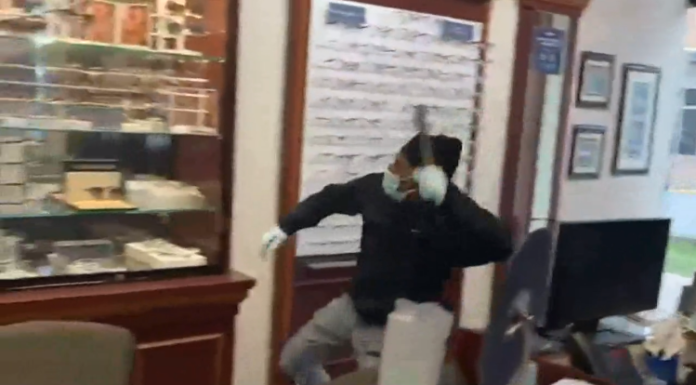 (WUSA9) It was a high-dollar heist in during regular business hours. Four masked thieves breaking display cases and grabbing merchandise then running of in minutes – not with jewelry but brand name eye glasses.

“Shock, like what’s going on?” Pedro Prudencio says he and his fellow employees at MrEyeDr. were asking as it all happened.

“And then I kind of, I don’t know, instinctively kind of also was like, ‘Okay, the police are on their way…and I think it kind of worked,” he said as the thieves can be seen taking off in the video he recorded.

But not before police say they got away with more than $20,000 in merchandise and damage at MrEyeDr. in Alexandria.

This is not the first time thieves have gone after eye glasses. Just since the end of last year police have been looking into a half dozen similar crimes.

Starting with a Bethesda LensCrafters back in December, police say thieves have hit eye glass stores in Chevy Chase, Georgetown, Arlington, and McClean.

“They’re in there within a matter of minutes and then they’re just quickly flipping and selling them for whatever they can make on them,” said 2nd Lt. Ian Yost with the Fairfax County Police Department. “They’re targeting those high end eyeglasses.”

And no prescription needed to make a profit on the black market.