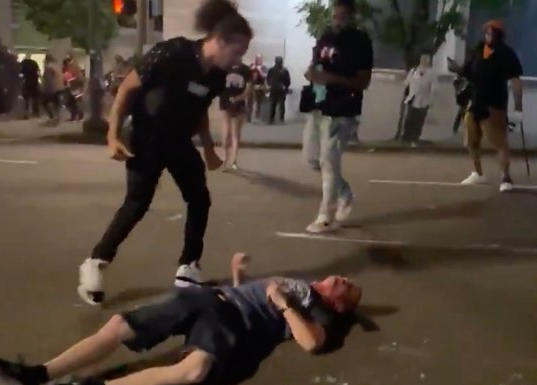 (New York Post) A mob of Portland Black Lives Matter and Antifa militants forced a white man to crash his truck, then punched and kicked him unconscious, disturbing footage shows.

A series of clips on social media shows the victim being surrounded in his white truck at 10:30 p.m. Sunday as others attacked his wife, who was punched and even tackled to the ground during the violent melee.

“He didn’t do nothing!” someone could be heard calling as others punched the driver as he sat in his truck, which was also repeatedly kicked.

The unidentified driver eventually sped off, with the mob chasing him — with some heard loudly laughing when he crashed into a light pole, according to the clips.

He was dragged from the truck and tackled to the ground — getting repeatedly punched as he tried to call his wife while also pleading with his attackers as he sat on the ground, the videos show.

As the mob dispersed to watch another fight, the main offender circled back around — kicking the defenseless driver in the face from behind, instantly knocking him out with his head cracking on the road.

Police in riot gear had to assist ambulance crews helping him as they were confronted by “a hostile crowd,” Portland police said in a release.

The victim was taken to a local hospital with serious injuries, police said. “The incident is under investigation and no arrests have been made,” the force said.