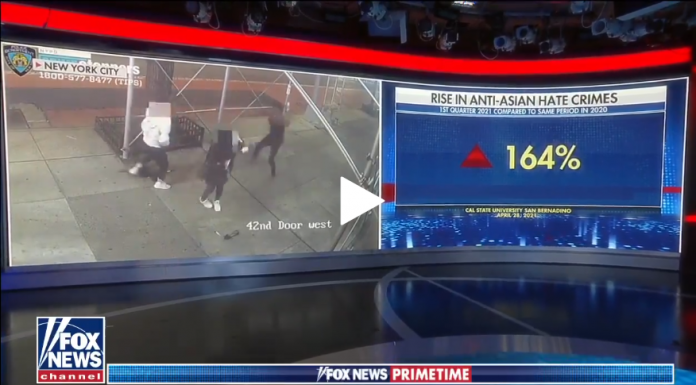 (Fox News) In what has been dubbed yet another possible hate crime attack committed against the Asian-American community, a video shared by a New York congresswoman shows a black man brutally slugging a 55-year-old Asian woman in the face.

This was just sent to me from my constituent. This just happened in my district in Chinatown. He has been arrested and our precinct is investigating. pic.twitter.com/sxNfCbrlza

The video showed the woman wearing a pink shirt and white hat while carrying a bag as she walked down a sidewalk on Bayard Street.

The man in a hoody appeared in the frame, walked up to the woman and hit her hard in the face. The woman’s hat flew off and the impact sent her reeling backward. She then slumped down against the column of an outdoor dining structure.

“What do you hit me for?” the man seemed to say to a passerby. “Why you hit me?”

A crowd of people appeared around the motionless woman to see if she was okay.

Yuh-Line Niou, who represents the state’s 65th Assembly District and shared the video, said the woman was “conscious and cognizant and alert.”

“Things are being investigated and the hate crime task force has been called in,” she added.