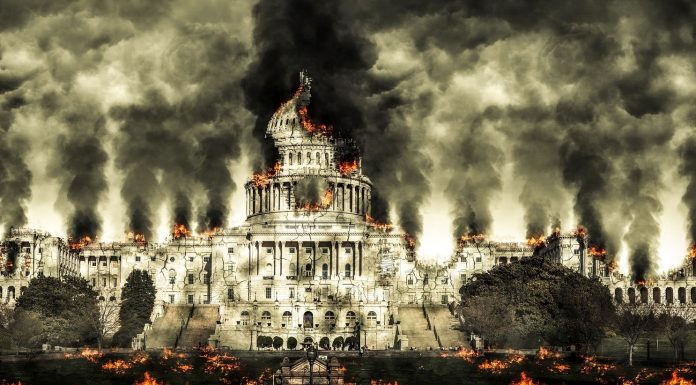 (Clint Siegner, Money Metals News Service) America’s key institutions are broken. More people wake up daily to that reality. They are preparing for the moment this realization dawns on Americans at large, which explains why the markets for physical bullion are so active.

The adjacent screen capture from CNBC in April says it all about how badly markets are doing at reflecting true economic fundamentals.

Washington, DC is dysfunctional and has been for decades. Regardless of anyone’s views on Presidential politics, the political class has failed.

Government always gets bigger and more expensive and liberty is in steep decline (this year perhaps faster than ever). Corruption is obvious and widespread within the Deep State, which serves its own interests rather than those of most Americans.

The Federal Reserve is a key tool for the Deep State. Its public mandate is to protect the value of the dollar but our money has lost at least 98% of its purchasing power over the last 100 years.

In recent times, the central bank’s actual mandate has become clear. The Fed exists to make sure Wall Street bankers are never held accountable for their sins and to make sure politicians have the funds for unlimited government.

The media, including big tech, is also completely subverted. One just has to look at which stories are reported and, perhaps more important, which stores aren’t.

Any objective person will scoff at the notion there is a free and honest press keeping Americans informed. Along with others, Twitter’s effort to censor and cover up the Biden family’s questionable dealings with Burisma and China is just today’s example.

We know the FBI had emails, photos, and videos from Hunter Biden’s laptop nearly a year ago some of which appears to be directly relevant to the charges leveled at Trump during him impeachment. Officials apparently planned to bury the Hunter Biden evidence.

Jeffrey Epstein was allowed to die while in federal custody awaiting justice, and prosecutions of his network of pedophiles could end with Ghislaine Maxwell.

From the Clintons to JPMorgan Chase, there is a long list of well-connected people and corporations we know are under the protection of the DOJ. The list of elites we don’t know about is probably longer.

The election system keeps letting Americans down. If the results of this year’s presidential election are contested it could reveal a lot about how crooked and dysfunctional voting, and vote counting, has become.

Finally, it would not be fair unless a portion of the blame for the current state of our institutions is assigned to the American people at large. Voters stood idly by as government grew and our liberties eroded.

Markets, political leadership, media, the justice system, and the election system are broken. Citizens let it happen. This is reality and it is now beyond serious dispute. Many Americans are in denial or oblivious about these institutions completely failing and they expect someone will come along and fix them.

That may happen, but not without a reckoning first which destroys what public confidence remains.

The moment of reckoning may not be too far away. Most Americans do sense trouble, and it is getting tougher to ignore.

A contested presidential election, or the next big economic decline could be the tipping point. Who knows? The important thing is to prepare for turbulent times ahead.