Yelp to Add ‘Racist Alert’ to Businesses Accused of Racism 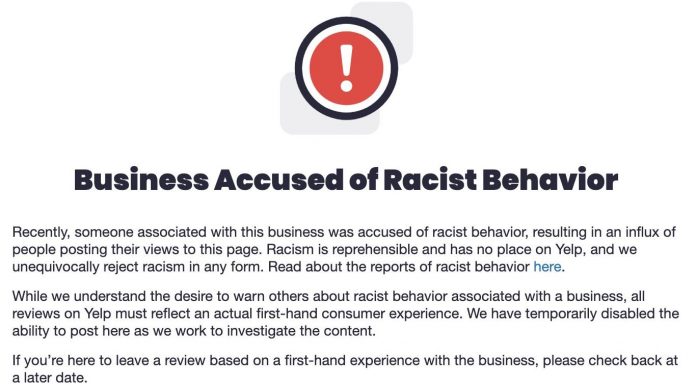 (Headline USA) Yelp announced this week that it will allow customers to report “overtly racist actions” in their reviews and attach a warning to a business’s page based on those reviews.

If a business “gains public attention for reports of racist conduct, such as using racist language or symbols,” Yelp will place an alert that states “Business Accused of Racist Behavior Alert” on the establishment’s page.

“As the nation reckons with issues of systemic racism, we’ve seen in the last few months that there is a clear need to warn consumers about businesses associated with egregious, racially charged actions to help people make more informed spending decisions,” Noorie Malik, vice president of user operations, wrote in a blog post.

To prevent users from baselessly accusing businesses of racism, Yelp will “verify” the claims by linking them to news articles. But there is no way for Yelp to prevent this new alert from being manipulated, as CNN pointed out.

Already, the company is inundated with fake reviews. Just last year Yelp had to disable reviews on nearly 600 pages after it was discovered that they were fake.

Malik argued that it is important for customers to be able to hold businesses accountable.

“Now more than ever, consumers are increasingly conscious of the types of businesses they patronize and support,” Malik said.

“They are ‘voting with their dollars,’ so to speak,” she said. “We needed a better solution to … help people feel comfortable patronizing a business.”

But as several critics pointed out, Yelp is essentially giving radical leftists an excuse to terrorize businesses deemed “racist”:

I see a lot of lawsuits in the future.
Who is the judge and jury as to whether an incident actually happened, or someone just made shit up because they felt like it?
Badges like this gives Antifa/BLM the green light to burn, loot, and destroy businesses. https://t.co/z4WF2Di3mS

.@Yelp seems to be willingly weaponizing itself on behalf of Karens and BLM terrorists.