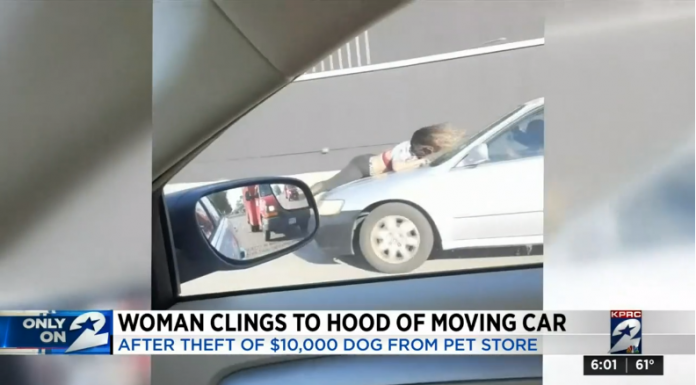 (Click2Houston) A frightening scene on a Houston highway. A woman clung to the hood of a speeding car while trying to get back a stolen puppy. Police said they are now searching for one of two suspects they believe was involved after an arrest was made Tuesday.

Bully Kamp in Harris County is full of bulldogs, exotic breeds and the people that care for them.

James said on Nov. 4, a couple came into her store to look at different breeds of dogs. They decided to buy a $10,000 exotic bully, according to James. Then as she went upstairs to grab paperwork for a nearby UPS driver, the couple left the store, the woman had the dog in her arms.

Then James bolted after them. She said her only concern was the 7-month-old bully, who just had surgery days earlier and needed special medication.

“My mind is focused on her health, I obviously didn’t care about my wellbeing,” James said.

She chased the couple to their car. James said she demanded they give the dog back, instead, they hit her with the car, then threatened to run her over.

“Next time I heard the gas go, he went very aggressively and it (the bumper) kind of like slapped me on top of the car,” James said.

She clung to the car as they sped throughout the area…

Authorities identified the woman as 21-year-old Royshana King. King was arrested and has been charged with aggravated robbery with a deadly weapon.