Who Will NEXT Be Removed from the Internet? 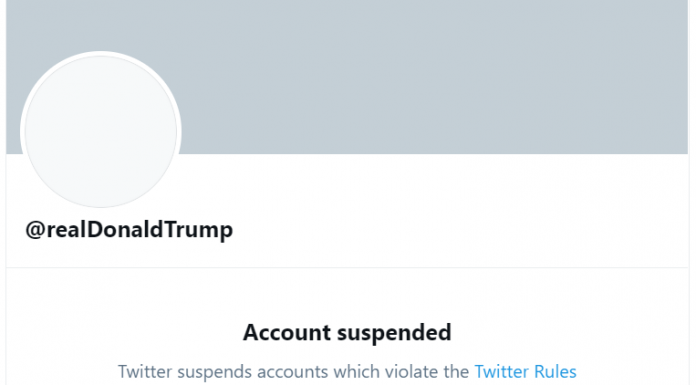 (Stefan Gleason, Money Metals News Service) On Wednesday, the Democrat-controlled U.S. House of Representatives voted to impeach President Donald J. Trump for a second time – this time with just a few days left in his term.

It was a mostly symbolic rebuke. Financial and precious metals markets barely budged on the news.

The Senate, which alone has the power to convict and remove an impeached President, isn’t even expected to hold a trial until after Trump leaves office and Joe Biden is inaugurated on January 20th.

Of much wider significance for the future of American politics – and for the free, open exchange of ideas on an array of controversial subjects – is the unprecedented mass, coordinated de-platforming of President Trump and some of his supporters by social media companies.

Trump’s iconic @realDonaldTrump Twitter handle has been permanently suspended. The reason, according to Twitter, is “incitement of violence.”

Inexplicably, Twitter singled out as the last straw for Trump this tweet in particular: “To all of those who have asked, I will not be going to the Inauguration on January 20th.”

This, in the minds of Silicon Valley’s content police, is tantamount to encouraging violence.

The precedent has been set. If not even the office of the presidency is above the arbitrary speech policing of internet overlords, then “cancel culture” can be deployed on anyone, at any time, over any alleged political transgression or micro-aggression.

The internet, once a decentralized, unregulated bastion of free expression, has been weaponized into a highly centralized system in which over 95% of content must pass through the filters of a few giant corporations acting in tandem.

This highly effective censorship machine operates with the active encouragement of deep state bureaucrats and most members of Congress, who are prohibited by the Constitution from abridging free speech directly themselves.

The explicit promise of free speech by the likes of Twitter, in its early days, was the Bait to acquire enough users to attain effective monopoly status. Then the Switch came.

Could a similar Bait and Switch befall holders of internet-based digital currencies such as Bitcoin?

Proponents of cryptocurrency view it as a decentralized tool for avoiding censorship, government regulation, taxation, the banking system, and the depreciation of the U.S. dollar.

But as Bitcoin prices rise and the cryptocurrency gains more widespread acceptance on Wall Street, the banking system, and with payment processors such as PayPal, it risks becoming just another tool for the powerful to wield influence and control.

Twitter CEO Jack Dorsey, for one, is a huge proponent of Bitcoin. The same tech overlord who banned the President of the United States – and whose payment processing company Stripe also cut off Trump’s campaign from fundraising abilities – probably doesn’t like Bitcoin for the same reasons most adopters of it do.

Jack’s own Twitter profile contains no personal information, no statements or links, only a single hashtag: #bitcoin. Perhaps Jack wants to lure people into Bitcoin because he knows that the leading cryptocurrency exchange, Coinbase, is also adept at banning users who engage in unacceptable political activities.

Will Big Tech one day decide to crack down on sound money proponents? All it takes is one instance of violence that can be linked to a disfavored political cause to give social media companies, search engines, and web hosts the impetus to ban proponents of that cause.

Big Tech gave moral and financial support to last year’s Black Lives Matter riots, which resulted in dozens of deaths and billions of dollars in property damage. The ideology that drives that form of political violence is deemed to be “progressive.”

Supporters of sound money and critics of the Federal Reserve System are apparently treading on thin ice. This week, Facebook temporarily blocked the account of gold advocate and former Congressman Ron Paul for supposed violations of “community standards.”

The powers that be both in Silicon Valley and Washington, D.C. definitely aren’t gold bugs. They are instead enthusiastic digital bugs who dream of overseeing a totally cashless economy.

While the utility and convenience of digital payments in the internet age can’t be denied, neither can the risks of digital deplatforming, tracking, theft, lost passwords, etc. Holding at least some significant tangible wealth (hard money) offline, outside of the banking system, is the ultimate form on insurance against such risks.

Biden’s Executive Actions for Economic Relief at a Glance

Biden’s Executive Actions for Economic Relief at a Glance

(National File) In what can only be seen as private sector political persecution, a Florida bank has become the latest financial institution...