What to Expect When America’s Not Expecting 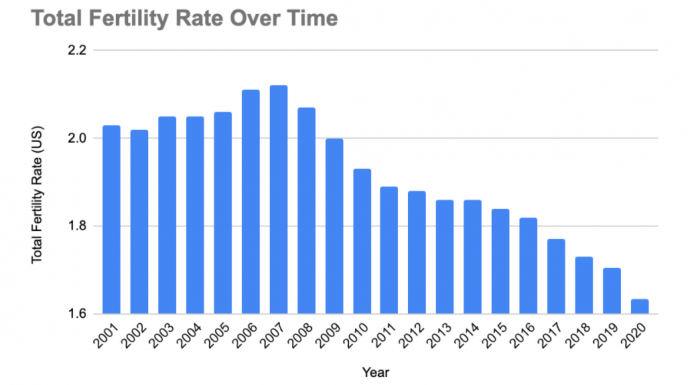 (Jon Schweppe, Substack) Like much of the western world, America is in the midst of an unprecedented fertility crisis. And while this “baby bust” phenomenon was clearly exacerbated by the COVID-19 pandemic, it certainly wasn’t caused by it:

Indeed, our total fertility rate (TFR), which is the average number of children American women would expect to have at the end of their reproductive lifetimes, dropped to just 1.635 in 2020 — a record low. The previous record? 1.705 in 2019. The previous record before that? 1.73 in 2018.

The problem here is obvious: for a civilization to continue to thrive or even survive, it must bring more people into the world than it is sending out of it. In order to achieve that one-to-one replacement, it is generally understood that a country needs a TFR of 2.1. A larger TFR means a nation is sustainable and growing, while a smaller TFR implies decline. Our current 1.635 TFR is nearly 25 percent (!) below replacement level.

Conservatives often debate the cause of the fertility crisis. Is it economic? Or is it simply the result of a culture increasingly hostile toward family formation? In many ways, it appears to be a bit of both.

Earlier this year, American Compass conducted a survey and asked respondents if they had achieved their desired fertility, i.e. if they had all the children they had wanted to have. Approximately half of all respondents indicated they had not had as many children as they wanted, and this was shown to be true across the board regardless of marital status or socioeconomic class. When asked why they didn’t have more kids, a startling number suggested financial hardship:

There’s no doubt that difficult financial circumstances play a role in many families choosing to have fewer children. So is that the answer? Strengthen the economy, improve the well-being of families, and bada bing, bada boom — no more fertility crisis?

It would stand to reason that if the problem were purely economic then increased household income would correlate with higher fertility. But alas, that’s just not the case — global trends have long shown an inverse correlation between income and fertility.

It’s hard not to look at these numbers and come away believing that higher education, or at least the individualistic, career-oriented, consumerist culture that’s pushed on students at schools of “higher learning,” is a big part of the problem. College is not only delaying the average age of first marriage, but it appears to be significantly depressing TFR.