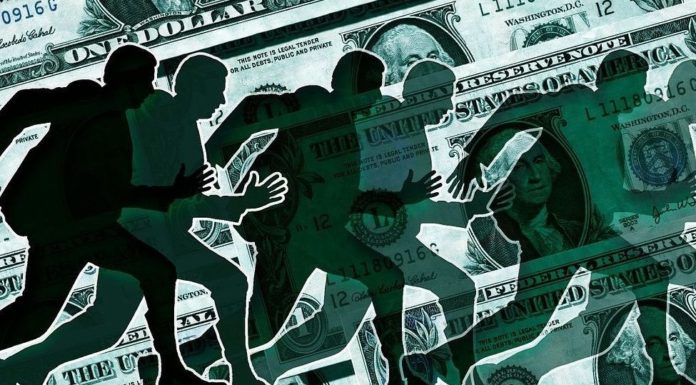 (Stefan Gleason, Money Metals News Service) The banking system may not be as sound we’ve been led to believe. It continues to get propped up through central bank interventions, which strongly suggests it wouldn’t be able to stand on its own.

Last Thursday, the Federal Reserve injected another $115 billion into financial markets via “temporary operations.” The Fed is targeting the repo market in particular, through which banks lend to each other on an overnight basis.

For some reason, banks have grown weary of committing liquidity to each other in what should be one of the safest lending markets on the planet.

Perhaps they are being overly cautious. Perhaps they (or one in particular) are simply being opportunistic.

After all, the liquidity shortage in the repo market led to a massive deluge of subsidized liquidity from the Federal Reserve and the launch of what is effectively a new phase of Quantitative Easing. When something goes wrong in the financial system, banks win.

JPMorgan Chase may have triggered the whole mini-crisis by moving more than $130 billion of excess cash out of the pool of reserves. That created a domino effect that tightened overall liquidity in the interbank lending market.

“One cause of the repo market’s sudden cash shortage was the large amount of debt instruments issued by the Treasury Department in late summer and early fall. Banks used resources they would normally devote to private sector lending and overnight loans to purchase these Treasury securities. This scenario will likely keep recurring as the Treasury Department will have to continue issuing new debt instruments to finance continuing increases in in government spending.”

Regardless of the cause, if the Fed had not intervened millions of people with holdings in bank accounts and money market funds could have seen their wealth diminish or even disappear.

Although Jerome Powell and company have apparently stabilized the repo market (for now), questions remain about systemic risks in the financial system.

Prior to the Federal Reserve System backstop and FDIC “insurance” for deposits, banks had to maintain much larger equity cushions. Some backed deposits dollar for dollar. Today major banks are so highly leveraged, they may only have 5 cents in reserve for every dollar of deposits.

A plunge in their capital value, a major economic downturn, or a crisis event that triggered mass withdrawals could render most banks insolvent. Since major banks have been deemed “too big to fail,” the government and the central bank would stand ready to bail them out.

But what if the authorities fall so far behind the curve that the whole financial system one day collapses on itself?

That came dangerously close to happening in 2008. Had the Fed let one more iconic financial institution go the way of Lehman Brothers, all the big banks may have quickly followed suit. Customer deposits would have been frozen until the authorities figured out how to bail out or bail in the banks on an unprecedented scale.

Money market funds should maintain a stable value even during severe downturns in stock or bond markets. In practice, they could be vulnerable to a “black swan” event that hits the financial system in a way nobody expects.

When such an event occurred in 2008, some large money market funds “broke the buck” – at least temporarily – and failed to maintain their promised stable value. Money market assets held via a brokerage account or mutual fund are generally not insured.

They hold only short-term U.S. Treasury bills. During a credit crunch, Treasuries would theoretically be the safest, most liquid IOUs to hold – especially since the Federal Reserve has now committed to purchasing T-bills on a monthly basis.

Holding hard assets outside the banking system is therefore a must if you want to protect against the risks to the financial system as well as the currency that underpins it. Gold and silver are the ultimate money and could become premier “growth” assets during a monetary crisis.

The last thing you’d want to do with your precious metals is get them tied up inside the banking system.

Safe-deposit boxes at banks are generally not suitable for precious metals storage. Some banks have policies that explicitly prohibit storing gold bullion. Regardless, your gold would be at risk in the event the bank goes under or gets raided by government agents.

We’re not here suggesting that you immediately liquidate and close all your bank accounts. Going unbanked would be an awful inconvenience for most people. Instead, just be sure you hold some liquid wealth outside the financial system sufficient to get you through any potential banking breakdowns.