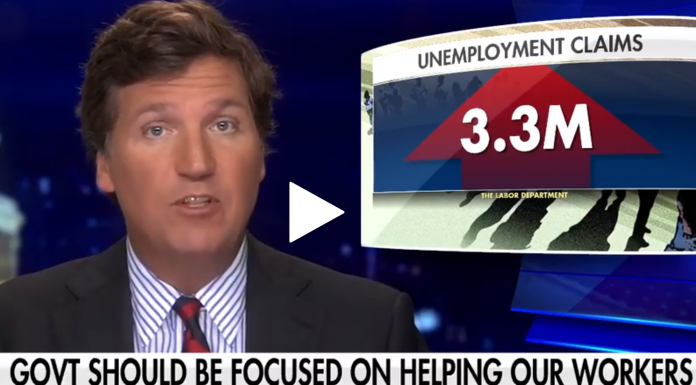 (Fox News) As the coronavirus contagion ravages the U.S. economy and social distancing requirements force the closure of businesses and put millions out of work, the federal government is actively inviting foreign labor into the country to seek jobs, Tucker Carlson said Wednesday on “Tucker Carlson Tonight.”

According to Carlson, the Department of Homeland Security released 20,000 H-2B visas Wednesday for seasonal workers to take landscaping, food processing and tourism jobs — while another 15,000 “bonus visas” are scheduled to be released in May.

“By law, the United States only has to offer 66,000 H-2B visas per year,” the host said. “But [acting] Homeland Security Secretary Chad Wolf has used his discretionary powers to add 35,000 extra visas.

“So that’s a total of 100,000 workers coming to this country to take jobs during the single biggest unemployment crisis in a century,” Carlson said. “It’s demented.”

Carlson noted that the St. Louis Fed recently estimated the unemployment rate could reach 32 percent and put more people out of work than in the worst year of the Great Depression.

“At some point coronavirus will be gone, but we could live with the crushing unemployment numbers for far longer and that’s a disaster for people, individuals and families — but it’s also a threat to the stability of our country,” Carlson said…

Carlson urged Trump to take immediate executive action to stop the release of the visas.