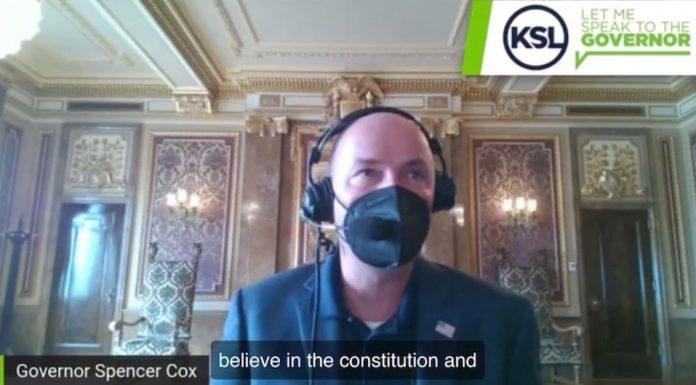 (The Post Millennial) Governor Spencer Cox took a call during a the “Let Me Speak to the Governor” question period on a local radio station KSL on Thursday from a constituent who was concerned about the Utah Jazz’s new scholarship program.

Utah Governor Cox takes question about whether the "Utah Jazz excluding white children from consideration for their scholarship program" "is racist." pic.twitter.com/8F7WSU2USn

The scholarship program, implemented by the basketball this year, promised a college scholarship to a student of color for every win the franchise earned.

The caller, announced as David from Highland, asked “The Utah Jazz is excluding white children from consideration for their scholarship program. Do you think this is racist? And what would you do to prevent the Utah Jazz from acting in this racist manner?”

“Well I don’t think it’s racist,” Cox began. “I think it’s in response to unfortunately some very racist injustices that have happened for a long time. And I’ll tell you what I’m gonna do for the Utah Jazz: absolutely nothing.

“Because y’know what? I believe in the Constitution and I believe in the freedom of, of businesses to make decisions, and decisions that are right for them. Your kid or my kid, they, they have no right to the Utah Jazz’s money, and the Utah Jazz and Ryan Smith can do the things that they want to do with their, with their funds and their revenues.”

For Cox, discriminating against one group of children based on their skin color and lifting up another group because of theirs isn’t racist, but equitable…

The program was announced in January by Ryan Smith, the new owner of the Jazz, on a podcast with Adrian Wojnarowski on ESPN. The initiative, Smith said, was to award “someone from an underrepresented or minority community” in Utah every time the team won a game.