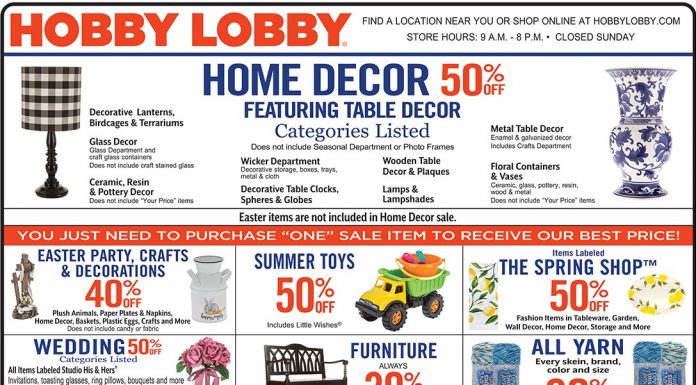 (Associated Press) The threat of the coronavirus pandemic has forced Hobby Lobby to close its stores until further notice, the arts and craft retail chain announced Friday.

The Oklahoma City-based company said in a statement that it was furloughing all of its store employees and many of its corporate and distribution workers.

Many state and local governments have issued orders to close all nonessential businesses to curb the spread of COVID-19, the illness caused by the novel coronavirus.

For most people, the coronavirus causes mild or moderate symptoms, such as fever and cough that clear up in two to three weeks. For some, especially older adults and people with existing health problems, it can cause more severe illness, including pneumonia, or death.

Hobby Lobby officials initially resisted efforts to close their stores, saying the sale of fabric was essential. A team enforcing a shelter-in-place order in Denver, Colorado, issued citations to Hobby Lobby stores. On Thursday, deputies in Dallas County, Texas, served Hobby Lobby with a cease-and-desist order warning to would otherwise be found in violation of the county’s order closing all nonessential businesses.

“It does not appear that Hobby Lobby meets the criteria in the order,” County Judge Clay Jenkins, Dallas County’s top governing official, said in the letter to Hobby Lobby’s general counsel Peter Dobelbower. “Our county is facing unprecedented challenges now, and we want to ensure that you are aware of the obligations placed on you.”

In its statement, Hobby Lobby said it was ending emergency leave pay and suspending use of paid time off and vacation benefits so that workers could apply for emergency federal income protection benefits. It also encouraged workers to apply for state unemployment compensation benefits, but it will continue medical, dental, life and long-term disability benefits for furloughed workers at least through May 1.

Hobby Lobby describes itself as the world’s largest privately owned arts-and-crafts retailer with more than 900 stores in 46 states with more than 43,000 employees, according to the chain’s website.

Hobby Lobby and its owners, the Green family of Oklahoma City, are prominent players in evangelical conservatism. A 2014 Supreme Court decision gave the chain an exemption from the Affordable Care Act’s birth control coverage requirement. Hobby Lobby President Steve Green also built the Museum of the Bible in Washington, D.C.