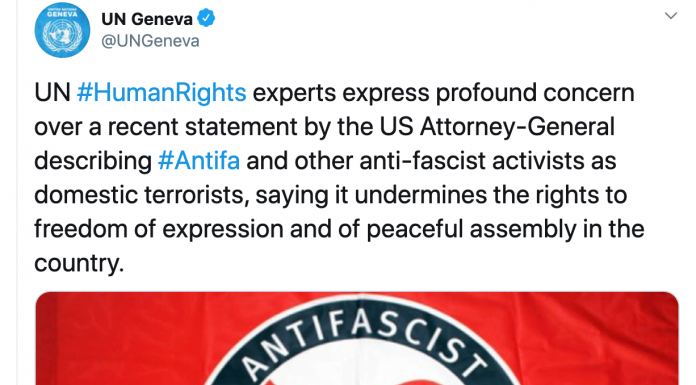 (The Post Millennial) The United Nations Office at Geneva (UNOG) deleted a tweet they posted to Twitter on Friday after receiving public backlash for defending Antifa’s right to “freedom of expression” and “peaceful assembly.”

The original tweet showed the Antifa flag with the text: “UN Human Rights experts express profound concern over a recent statement by the US Attorney-General describing Antifa and other anti-fascist activists as domestic terrorists, saying it undermines the rights to freedom of expression and of peaceful assembly in the country.”

The UN’s defense of Antifa—a group that has taken part in vandalism, arson, burglary, and assault—caused a substantial backlash, with some calling on the US to defund the international entity.

President Donald Trump has expressed his intent to designate Antifa as a domestic terrorist group, and Andy Ngo has recently announced his intentions to sue Rose City Antifa following his assault in the summer of 2019.

In response to the move by the international body, U.S. Secretary of State Mike Pompeo said that the Human Rights Council is “a haven for dictators and the democracies that indulge them”.

In 2018, the Trump administration withdrew from the UN Human Rights Council. America’s then-Ambassador to the United Nations, Nikki Haley, said at the time: “This step is not a retreat from human rights commitments. On the contrary, we take this step because our commitment does not allow us to remain a part of a hypocritical and self-serving organization that makes a mockery of human rights.”