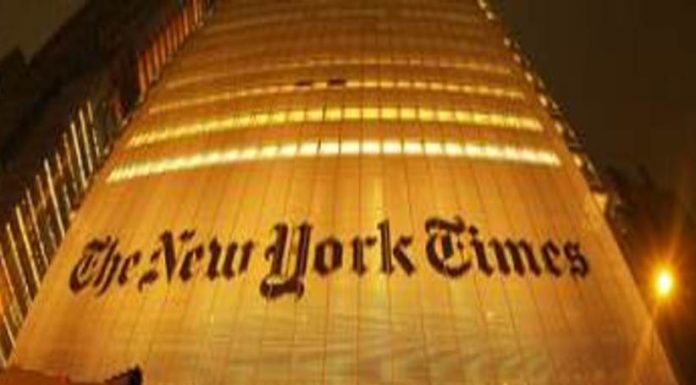 (Ben Sellers, Liberty Headlines) President Donald Trump sued The New York Times for libel over a March 2019 opinion piece that claimed—without evidence—that he had a quid pro quo arrangement with Russia during the 2016 campaign.

The piece suggested that Trump had communicated with Russian emissaries to solicit their support in taking down Democratic rival Hillary Clinton by hacking her campaign emails and publicly exposing her corruption.

In return, Russia would benefit from a more favorable foreign policy, although it is unclear that the bargain was fulfilled.

Those accusations “were and are 100 percent false and defamatory,” said Jenna Ellis, a legal advisor for Trump’s campaign, according to CNBC.

Ellis said the newspaper “was aware of the falsity at the time it published them, but did so for the intentional purpose of hurting the campaign, while misleading its own readers in the process.”

The op-ed piece, by former Times executive editor Max Frankel, came directly on the heels of the Mueller Report, which cleared Trump for claims of Russian collusion after a two-year investigation that Democrats had campaigned heavily on in 2018.

The article’s invocation of the Latin term quid quo pro hinted at the accusations Democrats would resurrect half a year later, when a partisan deep-state activist filed a whistleblower complaint alleging Trump had sought such a bargain with Russia’s adversary, Ukraine.

The president was impeached by the House Democrats in a largely party-line vote but was acquitted by the majority-GOP Senate.

Trump’s libel suit said that the Times exercised willful negligence and reckless disregard that was purposely intended to harm him and his chances at re-election.

In order to win a libel suit, one must prove that the offending statement was false, that the writer knew—or should reasonably have known—it to be false, and that it resulted in demonstrable damages.

However, it is rare—if not unprecedented—for a public figure in Trump’s position to meet the high bar designed to support the First Amendment press freedoms.

“The Trump Campaign has turned to the courts to try to punish an opinion writer for having an opinion they find unacceptable,” said a Times spokesperson, according to CNBC.

“Fortunately, the law protects the right of Americans to express their judgments and conclusions, especially about events of public importance,” the spokesman said. “We look forward to vindicating that right in this case.”

Notwithstanding, the suit signals another way in which Trump, having passed through the gauntlet of impeachment, is continuing to push back and, if necessary, settle scores against those who long have colluded to undermine his presidency.

While too numerous to catalog, the Times attacks on Trump—some of which have involved leaks of classified information from anonymous deep-state sources—have long been a sore spot. He has previously called on others to hold journalists accountable for leftist media bias—signaling his support for Supreme Court Justice Brett Kavanaugh to do so, among others.

Trump also was vocal in supporting Nick Sandmann, the Kentucky teenager who was smeared by the national media after misleadingly edited footage suggested he and a group of classmates had jeered at a Native-American activists.

Sandmann was cleared when complete footage showed the opposite to be true, revealing that Nathan Phillips, an adult protester, had confronted the teenagers and entered into their space during the annual March for Life rally.

Sandmann won a settlement for an undisclosed amount in his $275 million lawsuit against CNN and may have other cases pending against additional media outlets that resulted in threats against the high school sophomore and his family.

Trump’s legal team will attempt to prove not only that the March 2019 allegation was false and negligent, but that the Times “has engaged in a systematic pattern of bias,” said CNBC.

The paper itself has, at times, acknowledged that its openly hostile coverage of the president was a journalistic novelty, driven in part by sales and in part by the ideology of those in charge, such as managing editor Dean Baquet, who determined even before Trump’s election that they would refuse to “normalize” his candidacy.