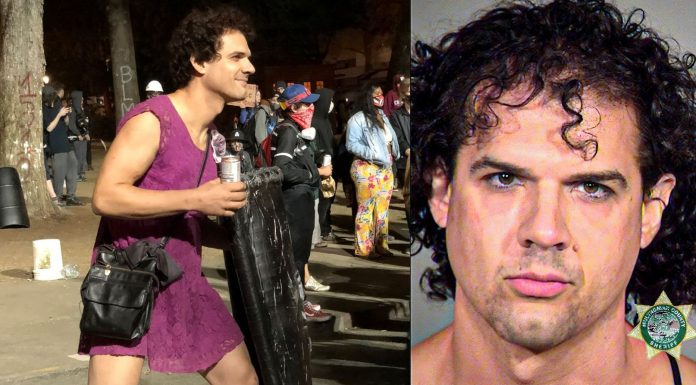 (The Post Millennial) A transgender Antifa protester with a long history of riot-related arrests was arrested again last week for allegedly starting a fight with employees at a Subway in downtown Portland.

41-year-old Peter Wilson Curtis, who goes by the name “Tabitha Poppins,” entered a Subway in Portland’s Chinatown on July 23 and initiated a fight with staff, according to the police report. During the dispute, Curtis “slammed his hands down” so hard that the food line glass broke.

Curtis gained notoriety in the Portland-area last year for her frequent participation in Antifa protests-turned-riots where she could often be seen wearing colorful dresses and heels while sporting a 5 o’clock shadow.

She was arrested five times at violent riots from June through September for numerous misdemeanor crimes ranging from reckless endangerment to resisting arrest to escape. However, all her cases were dropped by the Multnomah County District Attorney’s Office.

In one infamous video recorded on Aug. 19, Curtis was filmed dancing on a stolen restaurant table in the middle of the road that was set on fire by Antifa. She had been released from jail only hours prior.

After burning up a stolen mattress, antifa have set a wooden table from a restaurant on fire. Peter Curtis, aka “Tabitha Poppins,” who was arrested & charged last night, is back out at the riot tonight. #PortlandRiots #antifa pic.twitter.com/yjaonA5i7E