Toilet Paper Rolls Are Getting Smaller — Blame the Fed 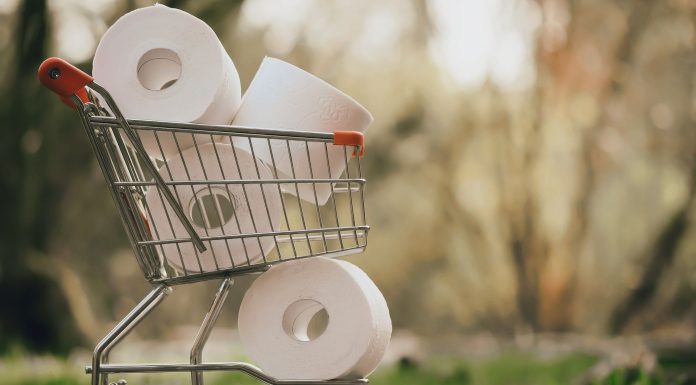 (Doug French, Mises Institute) A term has been coined for product sellers who shrink their packages, and thus, the amount of product in those packages, keeping the package price the same: shrinkflation. Anyone with a bit of good sense or economics training knows this is another form of price inflation, caused by what used to be the dictionary meaning of inflation; an increase in the supply of money.

For example, while the average American behind continues to widen, toilet paper has narrowed. A friend’s mother busted out a ruler to confirm her theory. Last year John Hebbe of Fairfax, Virginia, provided photographic proof to the Washington Post: an old roll was 4.5 inches wide, a new roll, 3.75 inches.

Of course the new rolls are fatter, for now, causing annoyance with home owners with toilet paper dispensers with the roller too close to the wall to accommodate the fatter rolls.

Greg Rosalsky wrote for NPR.org, “The original Charmin roll of toilet paper, [Edgar Dworsky, former Massachusetts assistant attorney general,] says, had 650 sheets. Now you have to pay extra for “Mega Rolls” and “Super Mega Rolls”—and even those have many fewer sheets than the original. To add insult to injury, Charmin recently shrank the size of their toilet sheets. Talk about a crappy deal.”

“Downsizing is really a sneaky price increase,” Dworsky told NPR. “Consumers tend to be price conscious. But they’re not net-weight conscious. They can tell instantly if they’re used to paying $2.99 for a carton of orange juice and that goes up to $3.19. But if the orange juice container goes from 64 ounces to 59 ounces, they’re probably not going to notice.”

Homo economicus is assumed to notice this trickery pokery in neoclassical economics theory. Oliver Kim wrote in The Crimson, “But here’s a confession: Homo economicus is at most a useful fiction—in economic jargon, a model. Human beings do not actually think like Scrooge McDuck, but, in approximation and in aggregate, we often behave like we do.”

“Over the years, Edgar Dworsky has documented the downsizing of everything from Doritos to baby shampoo to ranch dressing. ‘The downsizing tends to happen when manufacturers face some type of pricing pressure,’ he says. For example, if the price of gasoline or grain goes up,” Rosalsky explained.

What the NPR scribe misses is inflation’s breakdown of the division of labor. Average folk, not savvy Homo economicus types, have to pump their own gas, scan their own groceries, and, probably worst of all, manage their own retirement funds.

Since the government has deemed its paper tickets and computer digits to be money, Murray Rothbard wrote, “then the government, as dominant money-supplier, becomes free to create money costlessly and at will. As a result, this ‘inflation’ of the money supply destroys the value of the dollar or pound, drives up prices, cripples economic calculation, and hobbles and seriously damages the workings of the market economy.” That would include the division of labor.

“As we’re seeing inflation picking up now, that’s why I think you’re going to see more items being downsized,” Dworksy told Rosalsky. “And maybe it’s going to be a double-whammy: We’re going to see some products going up in price at the same time that you’re actually getting less in the package.”

A Charmin spokeswoman, when confronted by reporters at WBUR about shrinking the size of their toilet sheet squares, pulled an explanation out of her you-know-what, suggesting it was the result of “innovations” allowing “consumers to, basically, wipe their butts more efficiently.”

Rosalsky, writing from NPR La La Land believes, “consumers will start to notice and voice concern and the power of consumer demand will force companies to listen and right-size their products.”

Don’t blame Charmin, as Ludwig von Mises explained. “[I]f the ruling party does not want to imperil its popularity by heavy taxation, it takes recourse to inflation.”

Consumers should complain to those working at the Eccles Building producing money, not to those in the private market producing toilet paper.

Douglas French is former president of the Mises Institute, author of Early Speculative Bubbles & Increases in the Money Supply, and author of Walk Away: The Rise and Fall of the Home-Ownership Myth. He received his master’s degree in economics from UNLV, studying under both Professor Murray Rothbard and Professor Hans-Hermann Hoppe.