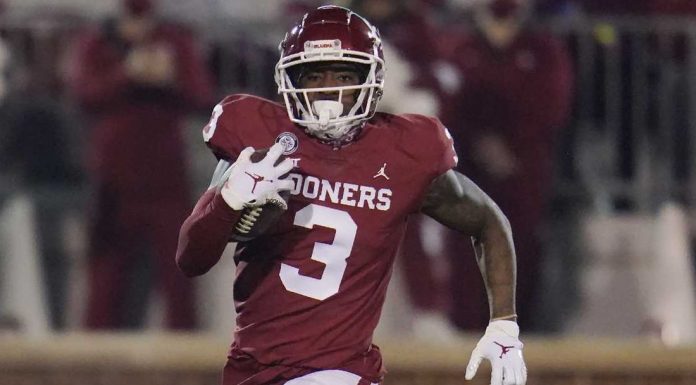 (The Oklahoman) Former University of Oklahoma running back Mikey Henderson has been accused in a felony charge of involvement in an April 15 robbery.

Michael Angelo Henderson, 19, was charged Tuesday with robbery, conspiracy and assault and battery with a dangerous weapon. He has been dismissed from the team, coach Lincoln Riley said.

He was released on a $100,000 bond after his first court appearance Wednesday in Cleveland County District Court. He denies the accusation, defense attorney Scott Anderson said.

Henderson is the third former player to be charged in the nighttime robbery at a Norman apartment.

Charged in May were wide receiver Trejan Bridges and running back Seth McGowan.

The victim told police three males came to his apartment and robbed him of marijuana after he refused to sell the drug to McGowan, a detective reported in a court affidavit.

He said they also took jewelry, high-dollar shoes and cash.

The victim identified Bridges and McGowan as two of the robbers, the detective wrote. The victim said the third male ran straight to his bedroom, threw things around and then ran out of the apartment with a full backpack.

He described the third male as masked and wearing a hoodie.

He said Bridges pointed a gun at him and threatened to kill him during the robbery, the detective wrote. He reported being struck in the head and kicked numerous times during a struggle with McGowan.