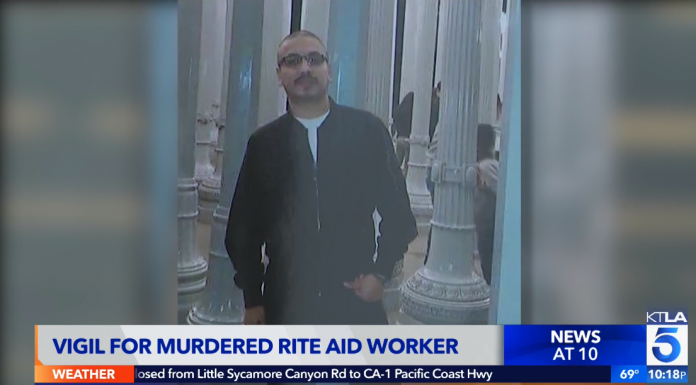 (Associated Press) A Rite Aid employee was fatally shot Thursday while confronting two shoplifters in Los Angeles, according to police and the union that represents workers at the store.

Two men were trying to leave the drugstore in the Glassell Park neighborhood of Los Angeles around 8:45 p.m. with unpaid merchandise when the victim tried to stop them, said Officer Mike Lopez, an LAPD spokesperson.

One of the men fired a gun at the victim, who has not been named publicly, striking him fatally, Lopez said. The men fled and remained at large on Friday night.

Lopez said he did not have information about the man’s relationship to the store, but a statement from the United Food and Commercial Workers Local 770 said he was an employee there.

The statement also criticized Rite Aid for failing to take action regarding previous safety concerns at the location, including death threats.

“We mourn his passing and keep his family and loved ones in our thoughts,” the statement said. “But his death should not have happened. For several months, 770 members have highlighted safety issues at this store.”

In a statement early Saturday, Rite Aid said it was “shocked and saddened by the killing of a valued associate” and is cooperating with the police investigation.