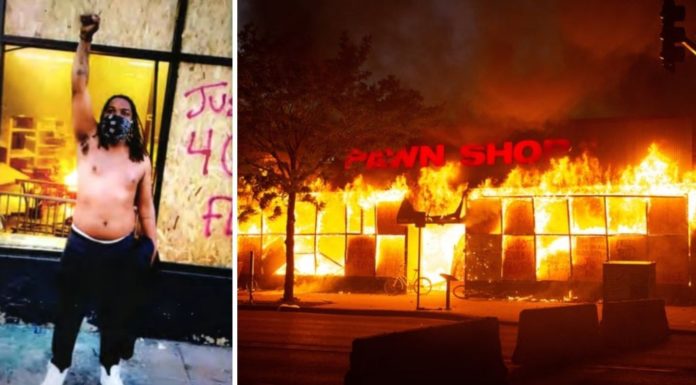 (The Post Millennial) Black Lives Matter rioter Montez Terriel Lee Jr., of Rochester, New York, was sentenced Friday to 120 months in federal prison for his role in burning down a Minneapolis pawn shop during the destructive George Floyd riots in May 2020.

Judge Wilhelmina M. Wright, the judge presiding over the case who granted a variance from sentencing guidance which outlined 235 to 240 months, handed down Lee’s prison sentence in US District Court in St. Paul.

“I was hoping to be another voice added to the cry for change. I wanted to be part of the solution instead of being part of the problem. Though I don’t stand by my actions, I stand by my reasons behind them,” Lee said.

Lee had previously pleaded guilty in July 2021 to a single count of arson in connection with a fire that destroyed the Max It Pawn Shop on Lake St. at 2726 E. Lake St. He admitted to starting the fire on May 28, 2020, which is now considered one of many arson incidents that happened during the summer riots.

According to court documents, Lee did not bring the gas can, but found it inside the pawn shop. The blaze occurred the same night the Minneapolis Third Precinct building was destroyed by fire, according to the Post Bulletin.

Afterwards, the body of 30-year-old Oscar Lee Stewart was found inside the shop’s rubble more than two months later. The cause of death was cited as “probable inhalation of products of combustion and thermal injury (building fire),” according to the prosecution’s position on sentencing after Stewart’s remains were sent to the Hennepin County Medical Examiner’s Office.

Lee was not directly charged with Stewart’s death. However, the man’s death did factor into the prison sentence, Post Bulletin reported.

In written arguments, prosecutors requested a 144-month sentence stating that “the Court’s sentence must account for the fact that Mr. Lee’s crime took Oscar Stewart’s life.”