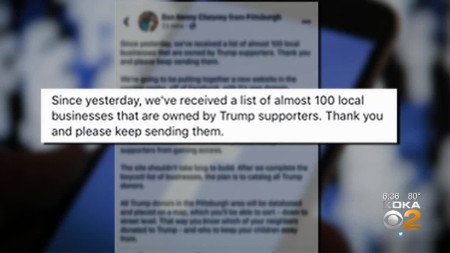 (Dan E. Way, Liberty Headlines) The Steel City’s free market could corrode under a progressive attempt to publicly shame and shut down businesses owned by supporters of President Donald Trump.

KDKA-TV in Pittsburgh reported Tuesday that a movement is sweeping across the city, played out on social media, to target Trump by harming his supporters.

“I think it’s important because people have a right to know where their money is going,” Pittsburgh blogger Brian Broome told KDKA.

A recent Facebook post on a “Ban Kenny Chesney from Pittsburgh” page said nearly 100 businesses owned by Trump supporters would be revealed on a new website.

The new website would include “a database of Trump-supporter owned businesses in the Pittsburgh area, as well as tips for how to get those specific businesses closed down.”

Broome sees the attacks on private business owners as an ideologically appropriate method of denying money to people with opposing political views.

“Trump supporters have boycotted everything from Keurig to Nike, so I don’t know why, quote-unquote, the other side can’t decide not to give their money to businesses as well,” Broome said.

“They want to cost people their livelihoods just because you don’t agree with them politically?” he told KDKA.

He called it a fascist movement, comparing it to Nazis identifying Jewish businesses with a Star of David so consumers would know which stores to shun.

It doesn’t matter if they are mom-and-pop stores or big box chains such as Home Depot, whose co-founder’s support for Trump ignited a boycott and a hashtag.

In a January National Review column, Dan McLaughlin wrote that political boycotts are not a free market activity, and pose risks to the economy.

“Free markets, like free speech or free exercise of religion, rest on a foundation that is cultural as well as legal,” McLaughlin wrote. “If the culture ceases to value free exchanges, the power of markets to deliver their benefits will wane.”