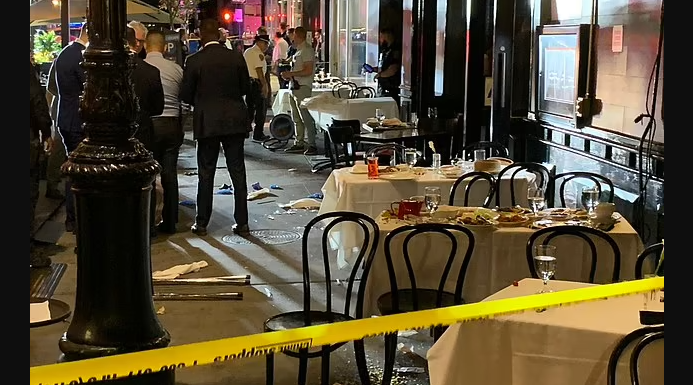 The crew tools around in Mercedes-Benzes and BMWs to pull off its heists, which cops believe include at least 12 robberies across Manhattan, Queens and the Bronx — netting more than $4 million in jewelry and watches just since August, sources said.

The robbers — who call themselves “OED” for “Own Every Dollar” — are affiliated with the notorious Trinitarios gang in the Bronx and suspected in at least one homicide, sources said.

“They are very vicious,” a Manhattan cop said.

“After they shot a victim Uptown, they pounced on him and stole his jewelry while he was dying.”

Monday’s robbery-crew incident was at least the second tied to Pergola, where a 34-year-old man had $100,000 worth of jewelry — including an Audemars Piguet watch — stolen from him when he left there early Aug. 19.

Other incidents that are believed to be part of the pattern include the Sept. 16 heist at the Upper East Side Chinese restaurant Philippe Chow, where robbers stole a Rolex wristwatch from a man dining outdoors on Sept. 16.

The bandits then set their sights on Melchior Cooke, 28, who was shot in the leg when he fought back.