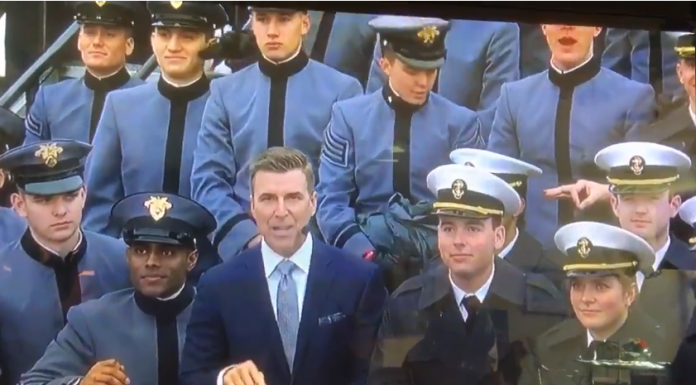 During an Army-Navy football game Saturday, two West Point cadets and one Naval Academy were captured on camera making the “ok” hand gesture.

Despite the “ok” hand gesture being a universally accepted gesture — one most prominently linked to the “circle game,” which was made popular by the teen-oriented TV sitcom “Malcolm in the Middle” years ago — the media pounced.

“At least one of the gestures resembled a white supremacist symbol described by the Southern Poverty Law Center as ‘the thumb and forefinger joined together in a circle, the remaining three fingers splayed out behind.‘”

NBC, which was quick to join the smear bandwagon against the underage Covington teens earlier this year — neglected to mention the “circle game.” Nor did it include any disclaimers about the SPLC, which, far from being an authoritative source, has been shown to be a radically left-wing smear merchant masquerading as a civil-rights organization.

USA Today, HuffPost and The Wall Street Journal also ran reports about the cadets’ alleged white supremacist gesture, though to their credit all three outlets mentioned the “circle game,” and none of them sourced the discredited SPLC.

Click Here To Comment
Email
Print
Previous articleMnuchin: “We Are Not Weaponizing the U.S. Dollar”
Next articleTeenage Climate Alarmist Vents on Overcrowded Train…Then Gets Trolled by Railway’s Twitter