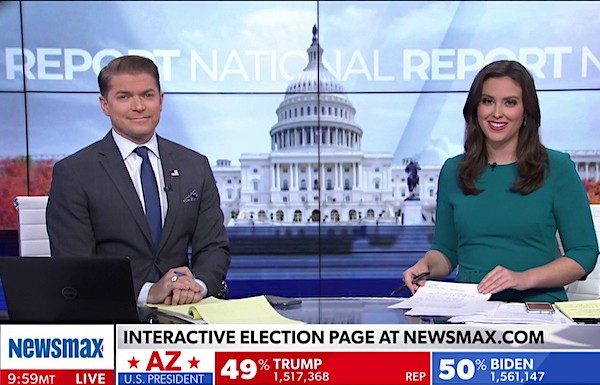 (Newsmax) It is official. Newsmax TV surpassed both Fox Business and CNBC in daytime ratings the day after Election Day.

Nielsen reported Wednesday that Newsmax drew 287,000 average viewers per minute in the key daypart 9am to 4pm, outpacing CNBC with 285,000 viewers and Fox Business with 281,000.

“We’re in less cable homes, our channel position is usually not as good as competitors, and our brand is less known, yet we’re beating these guys,” Chris Ruddy, CEO of Newsmax TV said. “We have a better mousetrap and viewers are flocking to us.”

“Our trajectory is like a rocket right now,” Ruddy said.

On Election Night, Nielsen reported Newsmax TV’s coverage was watched by 3 million viewers, with as many as 600,000 viewers per minute.

Newsmax was the first network to project Trump the winner of Florida, as Fox refused to call the state, despite more than 90% of ballots counted.

Fox’s decision to call Arizona early, with just 14% of balllots counted and without other TV networks joining their decision, led to a viewership revolt across social media.

Newsweek was the first to report on the outrage, headlining: “Conservatives Turn Against Fox News Over Election Coverage, Change Channel to Newsmax.”

No matter what the final results are tonight, one thing is extremely clear. @FoxNews can no longer claim to be the fair and balanced network they once were. There are a lot of biased hacks there now and a ton of folks are noticing. It’s now @newsmax for me for election results.