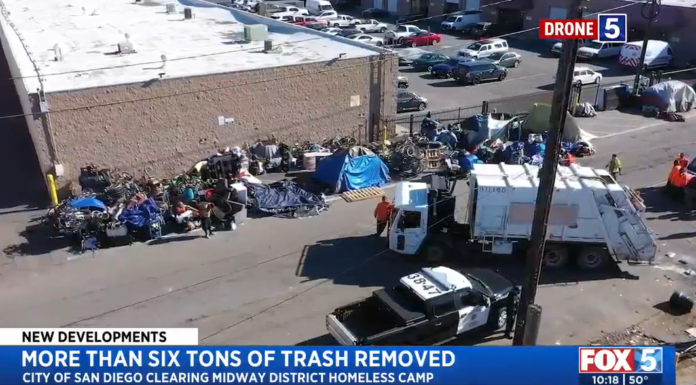 (FOX 5 San Diego) The city on Thursday held its second cleanup this week at one of San Diego’s largest homeless camps.

The encampment is located in the Midway District, along Sports Arena Boulevard between Pacific Highway and Rosecrans Street. Thursday’s cleanup comes one day after homeless residents started moving back into the area after the city held its first cleanup Tuesday.

City workers had campers move to the other side of the street Thursday while they picked up 6.9 tons of trash and debris.

Andrew H. helped clean up the area in the camp where he lives. He told FOX 5 he pitched a tent in the encampment after falling on hard times and losing his job.

“It’s a temporary situation for me so why not make the best of it,” he said.

While some homeless advocates help people get out of the camp, the city told FOX 5 only seven out of about 180 people living in the camp accepted help from the city to go to shelters.

Andrew said it’s not that simple to pack up and leave. He said going to a shelter means leaving behind many belongings that could get stolen…