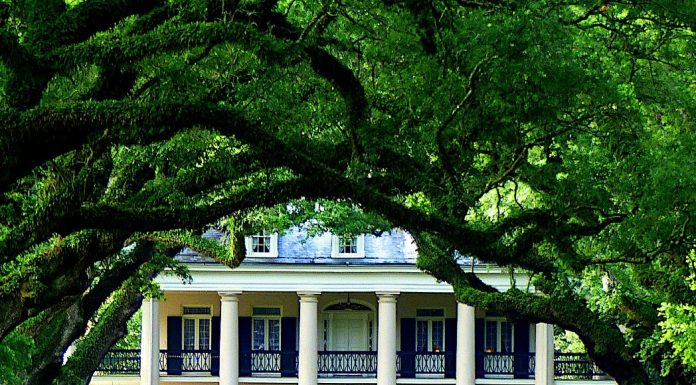 Many of the preserved plantations lie halfway between Baton Rouge and New Orleans on the Mississippi River, making them a popular tourist destination. Several have been used prominently in movies like “Interview with the Vampire” and “12 Years a Slave.”

The River Parishes Tourist Commission had already planned to drop the plantation reference by the end of this year—a decision made in 2018 as politically correct grievance culture has pressured the picturesque antebellum sites to stop catering to boutique events such as weddings that glossed over their legacy of violence.

Meanwhile, in nearby Baton Rouge, which sits just northwest of the plantations, Louisiana State University has stripped the name of a segregationist former president from the campus’s main library.

Friday’s action came within hours after the LSU Board of Supervisors unanimously voted for its removal.

A worker used a crowbar and hammer to strike Troy H. Middleton’s name from the building. A university spokesman says a plaque and bust honoring Middleton also were removed from the site.

Middleton was LSU president from 1951 until 1962. Middleton, in news reports and letters from his time as president, said he didn’t want Black students on campus.

LSU interim President Tom Galligan recommended the name removal after meetings with Black student leaders, who raised concerns about inequality and the lack of diversity on campus.

Galligan also committed to increase hiring of African American faculty and staff, recruitment of students of color and funding for minority programs.

Many other sights of historical significance have faced possible eradication in the mass frenzy.

Earlier this week, the University of Virginia announced that a proposed redesign to its logo that incorporated the campus’s iconic serpentine walls would be scrapped due to the Thomas Jefferson-founded school’s legacy of slavery.

House Speaker Nancy Pelosi also demanded that the portraits of all of her predecessors with ties to the Confederacy be removed from the halls of Congress.

NASCAR also agreed to ban the use of the Confederate flag at its races and allow kneeling during the national anthem; the group Lady Antebellum announced it was changing its name; and iconic brands including Aunt Jemima and Uncle Ben’s have decided to dispatch with their mascots over criticism of racial stereotypes.

Adapted from reporting by the Associated Press