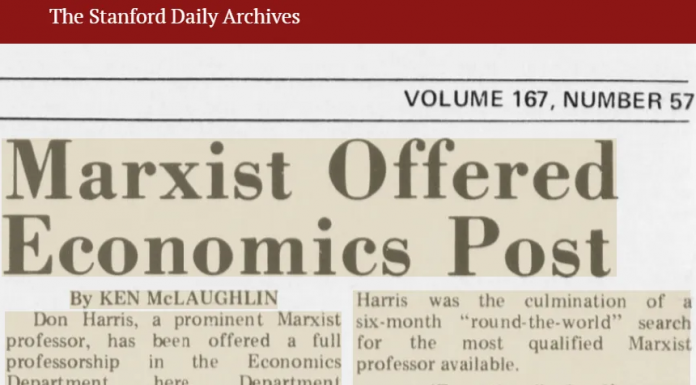 (News Punch) The Democrat Party and mainstream media are trying to convince Americans that Sen. Kamala Harris’ represents a safe and “moderate” choice on the ballot for vice president.

But just how “moderate” is the daughter of Prof. Donald Harris, the foreign-born Marxist professor at Stanford University who dedicated his career to promoting radical economics to American undergraduate students?

Despite paying a warm tribute to her family at the Democratic Convention as she accepted the vice-presidential nomination, Sen. Kamala Harris skipped past any discussion of her father, Donald Harris, a Jamaican-born professor of economics at Stanford University.

Perhaps this is because Don Harris is a renowned Marxist who was recruited after a “six-month ’round-the-world’ search for the most qualified Marxist professor available“, according to a Stanford Daily article at the time.

Don Harris was repeatedly and openly identified as a “Marxist professor” in Stanford Daily articles from the 1970s.

Don Harris, a prominent Marxist professor, has been offered a full professorship in the Economics Department here, Department Chairman James Rosse confirmed yesterday…The appointment is the direct result of student pressure in recent years to hire more faculty who favor an “alternative approach” to economics, said Economics Prof. John Gurley, who now teaches the only undergraduate course in Marxist economics.