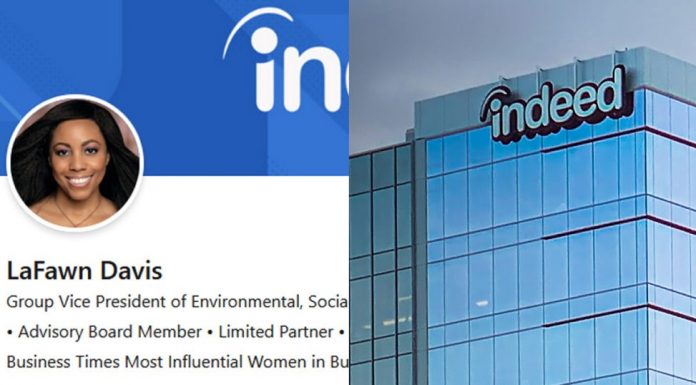 (National File) Indeed, the largest hiring company in America, is the latest company caught utilizing anti-white Critical Race Theory-themed “Diversity, Equity, and Inclusion” in the workplace, as internal documents leaked to National File show. Indeed appears to be using Critical Race Theory-themed materials inside its own company, and appears to be planning to force it on the over 3 million companies who use Indeed to find new employees.

Indeed intends to do this through their “Inclusive Interview Rule,” which mandates that women and “underrepresented ethnic minorities” must be considered for promotions, regardless of qualifications. Indeed is also mandating several internal trainings for all employees, covering topics including “unconscious bias in the hiring process.”

Indeed claims to be able to train its employees to “Recognize your own unconscious biases and how they can affect your actions in the interview process”.

LaFawn Davis, referenced in the documents obtained by National File, uses left wing buzzwords in her LinkedIn profile, where she reveals that her pronouns are “she/her/hers” and her “Preferred Pronoun” is “queen”.

She is listed as one of 2021’s “Queer50” and is one of Business Times’ “Most Influential Women In Business”.

Davis describes herself as a “Thought leader in communications, product inclusion, employee engagement and diversity & belonging.” She has worked for Indeed since 2019.