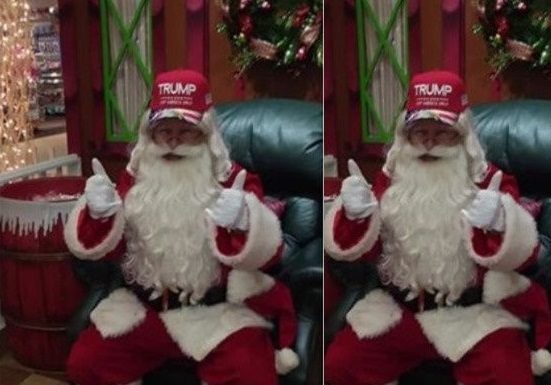 (Cassandra Fairbanks, Gateway Pundit) A Georgia man who has played a mall Santa Claus for the last 50 years was fired earlier this week for posting a photograph in a Trump hat on his personal Facebook account.

Frank Skinner’s decades long career playing Father Christmas includes 14 years at the Mall of Waycross, the mall that just fired him after receiving a complaint about his post.

The photo in question was taken as the mall was closing, when no children were around, and just meant for his friends and family.

“It really was an innocent thing. It really was,” Skinner told First Coast News. He explained that he felt as though his constitutional rights were violated when they told him he could not return to his job.

In a Facebook post about the firing, Skinner stated that he did not mean to “create a firestorm by doing that but simply intended to post the photo on my page for a little humor, as I have many friends and family who, like me, support our president.”

“I in no way meant to cause anyone discomfort,” Skinner said. “At the time I thought it was harmless fun. Now I realize in this day and age that I should not have posted it. Obviously it did offend some folks. I can assure everyone that was not my intent. I have learned a lot from this. Going forward I will keep this in mind.”

Here he is earlier the same day he was fired w/ my sister & friend!!Note he did not work w/ the Trump hat on! He put it on after work was over! This is an abomination to his 1st Amendment Right!!Our hometown !! Upset for him! pic.twitter.com/NBiqAxOwbd