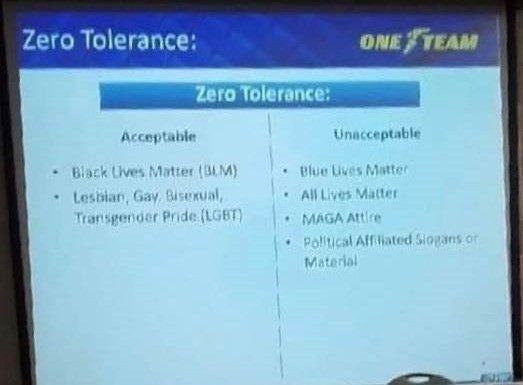 (ZeroHedge) A slide that purports to be from Goodyear’s diversity training has leaked and appears to show that the company considers “Blue Lives Matter,” “All Lives Matter” and “MAGA” attire “unacceptable,” while at the same time encouraging “Black Lives Matter” and “Lesbian, Gay, Bisexual, Transgender Pride (LGBT)” attire.

The differences are shown under a slide that appears to be outlining a zero tolerance policy. Aptly named, if we say so ourselves.

As The Gateway Pundit put it, the slide appears to be “zero tolerance” against support for police or conservative values. Which, of course, flies in the face of actually engaging in the values of tolerance and equality.

The employee who took the photo of the slide claimed that it was “presented at a Topeka plant by an area manager and says it came from their corporate office out of Akron, Ohio,” according to a report from WIBW.

President Trump is furious at Goodyear’s clearly biased “diversity” training and has tweeted a rather angry response:

Don’t buy GOODYEAR TIRES – They announced a BAN ON MAGA HATS. Get better tires for far less! (This is what the Radical Left Democrats do. Two can play the same game, and we have to start playing it now!).

Well, that didn’t take long. Goodyear has quickly issued a press release backing away from the ‘diversity’ training’s liberal bias.

Yesterday, Goodyear became the focus of a conversation that created some misconceptions about our policies and our company. Goodyear has always wholeheartedly supported both equality and law enforcement and will continue to do so. pic.twitter.com/oO6jUg2rTR

So, to summarize, Goodyear hired an external firm to do ‘diversity training’ to signal just how virtuous they were and the leftist bias in the ‘diversity’ came back to bite them.

Click Here To Comment
Email
Print
Previous articleHow Can Wall Street Be so Healthy When Main Street Isn’t?
Next articleTeen Who Punched, Killed Man Over $1 Sentenced to ‘Anger Management’