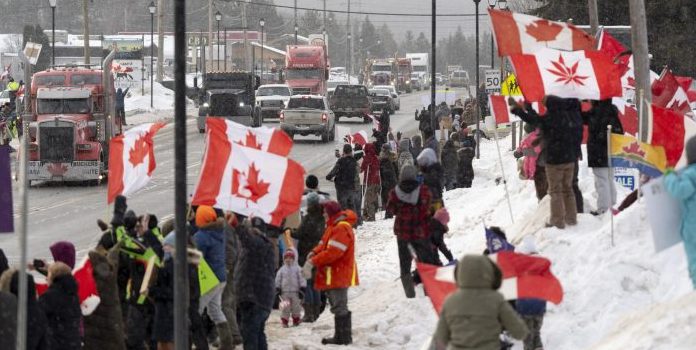 (Gregg Pupecki, Headline USA) In an unprecedented move, the fundraising website GoFundMe shut down and seized $10 million of donations made to the Freedom Convoy 2022 through the website. They cited reports of alleged violence in Ottawa as the reason for seizing the donations.

GoFundMe released a statement saying, “We now have evidence from law enforcement that the previously peaceful demonstration has become an occupation, with police reports of violence and other unlawful activity.”

The BBC, however, reported that, “Of the thousands who joined the truckers’ protest, three people have so far been arrested: one for carrying a weapon, one charged with mischief under $5,000, and another with uttering threats on social media.”

GoFundMe reportedly had released $1 million to the organization before deciding late Friday to cancel the fundraiser and seize the remaining money, even as the Freedom Convoy continues to roll across Canada and gain public support.

“No further funds will be directly distributed to the Freedom Convoy organizers,” officials said. “We will work with organizers to send all remaining funds to credible and established charities verified by GoFundMe.”

Ottawa Police admit in a twitter post that they asked for the donations to be seized and called on other crowd-sourcing websites to do the same. Police officials, however, didn’t disclose what violent crimes were committed to justify them conspiring with a public fundraising platform to deny the organization of legally-donated funds.

The move garnered outrage on social media from most sides of the political spectrum.  Many expressed disgust over the hypocrisy of the platform for allowing BLM and Antifa fundraising events during the riots of 2020.

Some noted GoFundMe was active in fundraising when the streets of Seattle were violently taken over and occupied for months.

This tweet was posted *after* the CHAZ murders https://t.co/QEv7ciOYI4

Following the announcement many suggested that anyone who donated request that their money be returned. GiveSendGo, another fundraising website offered to accept the Freedom Convoy campaign if they set one up.