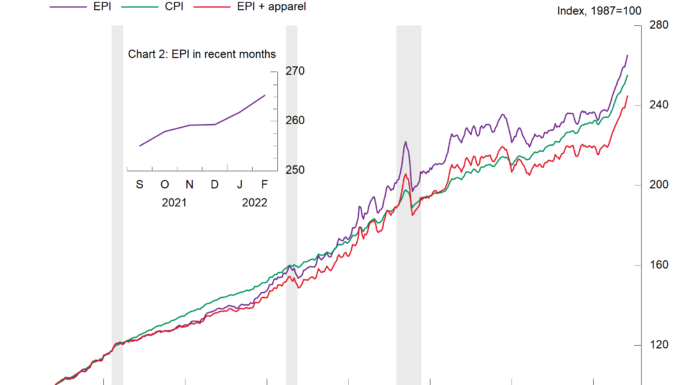 Motor fuel prices, which are often a significant driver of the monthly changes in the Everyday Price index because of the large weighting in the index and the volatility of the underlying commodity, rose 5.4 percent for the month and are up 38.1 percent from a year ago.

The Everyday Price Index including apparel, a broader measure that includes clothing and shoes, rose 1.4 percent in February after gaining 1.1 percent in January. Over the past year, the Everyday Price Index including apparel is up 9.3 percent, up from 8.8 percent in January. That is the fastest pace since August 2008 and the third-fastest pace on record. Apparel prices rose 3.1 percent on a not-seasonally-adjusted basis in February. Apparel prices tend to be volatile on a month-to-month basis. From a year ago, apparel prices are up 6.6 percent.

The Consumer Price Index, which includes everyday purchases as well as infrequently purchased, big-ticket items and contractually fixed items, rose 0.9 percent on a not-seasonally-adjusted basis in February. Over the past year, the Consumer Price Index is up 7.9 percent, significantly less than the 9.5 percent rise in the EPI but still a multidecade high.

After seasonal adjustment, the CPI rose 0.8 percent in February while the core increased 0.5 percent for the month. Within the core, core goods prices were up 0.4 percent in February and are up 12.3 percent from a year ago. The 0.4 percent monthly gain was the slowest since a 0.3 percent rise in September 2021 and is less than half the average monthly gain over the October 2021 through January 2022 period.

Price pressures for many goods and services in the economy remain elevated due to shortages of supplies and materials, logistical and supply chain issues, and labor problems. While cresting numbers of new Covid cases in late January and early February had the potential to support businesses’ efforts to improve supply chains and expand production, geopolitical and global economic turmoil surrounding the Russian invasion of Ukraine is launching a new wave of disruptions to businesses.

The outlook has become highly uncertain and extreme caution is warranted.