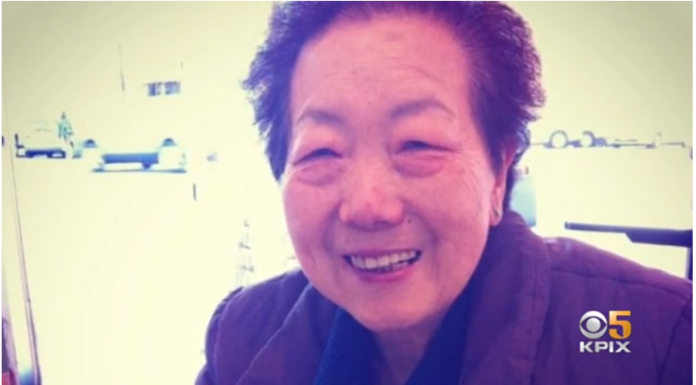 (KPIX 5) The man arrested for an unprovoked stabbing attack on two elderly Asian women in San Francisco has a long history of arrests, according to a police source.

San Francisco police identified the man as 54-year-old Patrick Thompson of San Francisco. A law enforcement source provided a surveillance image to KPIX 5 that was circulated among officers to find Thompson following the Tuesday attack on Market Street.

A witness snapped a photo of the same person from the back, moments after the attack at the bus stop that injured 84-year-old Chui Fong Eng and an unidentified 63-year-old Asian woman.

“All you see is just a big silver thing in his hand brass knuckle style, slowly puts it in and walks off,” said witness Eric Yung…

According to a law enforcement source, Thompson has been arrested more than two dozen times in the last 20 years. He was placed under a psychiatric hold at least once. In 2019, he was arrested for battery.

KPIX 5 has learned that in 2017, he was arrested for stabbing a person at this homeless shelter on 5th and Bryant Streets with a pair of scissors. Police say it was another unprovoked attack.

Thompson was picked up by Tenderloin Station officers Tuesday on Eddy Street near Larkin Street and booked on charges of attempted murder and elder abuse.

Eng is still recovering at the hospital after being stabbed in the arm and chest. Her grandson Drew told KPIX 5’s Betty Yu she needed a breathing tube after the knife cut her lung and rib cage.

An online fundraiser for Eng has generated more than $70,000 in less than 24 hours.