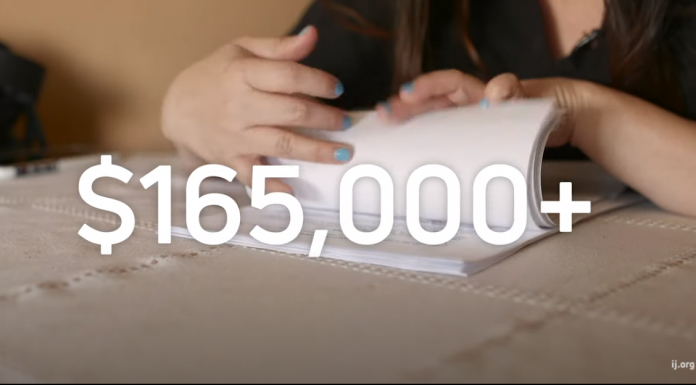 (Institute for Justice) The town of Lantana has practically robbed Sandy Martinez of the value of her home through excessive fines, mostly as a result of the way she parks her own cars in her own driveway.

One parking violation, assessed daily for over a year, totals more than $100,000. The total amount the town fined her, which includes two other minor infractions, comes to an astounding $165,000, more than half what her home is worth. It is also an amount that is impossible for Sandy to ever pay off.

But now Sandy is teaming up with the Institute for Justice (IJ) to file a lawsuit that asks a Florida court to rule that her excessive fines violate the state constitution. If Sandy’s suit is successful, it could pave the way for other Floridians to seek protection from crippling fines that trap them in a cycle of debt and poverty.

“The government cannot lock you into a lifetime of debt and cripple you financially for minor infractions that do not threaten health or safety,” said IJ Attorney Ari Bargil. “Florida’s Constitution forbids fines that are ‘excessive’ or ‘shock the conscience.’ And that’s exactly how to describe six-figure fines for petty violations—unconscionable.”

The $165,000 that Sandy owes is a result of daily fines that the city assessed for property code violations. Most of this amount is a result of the way Sandy’s family parks their cars. Sandy, her two adult children and her sister all own cars so that they can get to their jobs. When all four cars are parked in the driveway, sometimes one of them has two tires on the lawn, a $250 per day violation.

With no other safe or legal options for parking other than the driveway, Sandy has received several citations. When Lantana cites a homeowner, the city forces them to correct the violation then call and schedule another inspection. After one violation, Sandy called the city but an inspector never came out.

When Sandy discovered that the fines were still accruing over a year later, she immediately called and passed the inspection. But by then, the amount she owed was $101,750. This fine is on top of fines for two other similarly trivial violations—for cracks in the driveway and a fence that fell over during a storm.

“I think it’s ridiculous that Lantana would charge me over $100,000 for parking on my own grass that I paid for,” said Sandy. “Fines I can never hope to pay off and that basically make me a renter in my own home are ‘excessive.’ I hope that by successfully challenging these fines, I can ensure that no one else has to go through something similar.”

Unfortunately, Sandy is far from the only American to be crushed by sky-high code citations. A 2017 report by the U.S. Commission on Civil Rights revealed how municipal fines and fees abuse is a nationwide problem. Yet some states, such as Indiana and California, have started to consider an offender’s ability to pay when assessing fines and fees.

Florida’s Constitution protects residents from excessive fines and courts have held that fines that “shock the conscience” are unconstitutional. Sandy’s case could more firmly establish when fines violate the state constitution.

“Municipal code enforcement in America is completely out of control,” said IJ Attorney Michael Greenberg. “All over the country, hardworking people regularly face financial ruin from daily code enforcement penalties that quickly snowball into tens or hundreds of thousands of dollars. Our constitutional protection from excessive fines prohibits precisely this sort of abuse.”