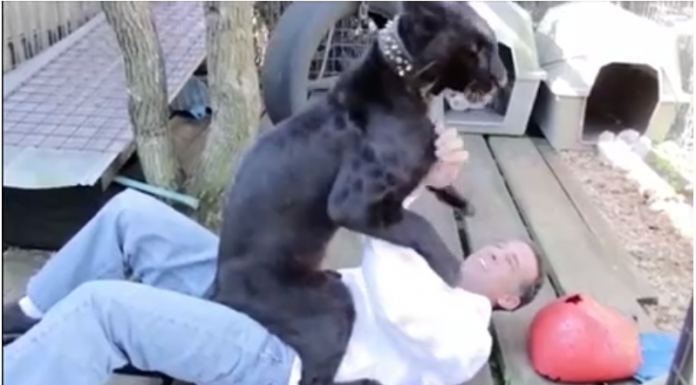 (Local10) A man who paid $150 for a “full-contact experience” with a black leopard says he had to undergo multiple surgeries after he was mauled by the fully-grown animal in an enclosure behind a Davie home.

A picture obtained by Local 10 News shows Dwight Turner’s heavily bandaged head and ear after the savage attack, which detectives from the Florida Fish and Wildlife Conservation Commission say happened behind a home on Earnest Boulevard on Aug. 31.

The man who lives there, identified as Michael Poggi, has a Facebook page saying he runs an animal sanctuary for rare and endangered animals.

Authorities say Poggi was charged with allowing full contact with an extremely dangerous animal and was cited for maintaining captive wildlife in an unsafe condition.

Investigators say Poggi charged the 50-year-old Turner $150 for a “full-contact experience” with his black leopard — to “play with it, rub its belly and take pictures.”

FWC’s report says that once Turner walked inside the enclosure, the leopard attacked.

The injuries were so severe, the report says the victim’s scalp was “hanging from his head and his right ear was torn in half.”