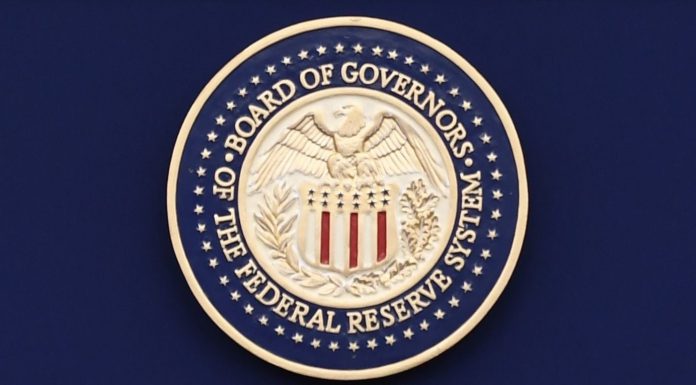 (Associated Press) Just as the outlook for the global economy had been brightening in recent months, a new threat has suddenly emerged in the form of the viral outbreak in China.

That was the cautionary message that Chairman Jerome Powell delivered Wednesday after the Federal Reserve held interest rates low after its latest policy meeting.

Speaking at a news conference, Powell said the signing of a preliminary U.S.-China trade deal earlier this month, the resolution of Brexit and continuing low interest rates in the United States and abroad had suggested that the world economy would start to expand more quickly after being held back by trade conflicts. That scenario is now complicated by the emergence of the virus.

Still, Powell noted that the extent of the economic damage that the virus may ultimately inflict, in China or around the world, remains unknown.

“There is likely to be some disruption to activity in China and globally,” Powell said. “It’s very uncertain how far it will spread and what the (economic) effects will be in China, for its trading partners, and around the world…. We are very carefully monitoring the situation.”

Even so, Powell said he thinks there are “there are signs and reasons to expect” a global economic rebound. And he said the initial U.S.-China trade agreement and a new trade pact among the U.S., Canada and Mexico that President Donald Trump signed into law Wednesday could potentially boost the U.S. economy.

Powell spoke after the Fed had announced that it has kept its key interest rate unchanged in a low range of 1.5% to 1.75%, far below levels that were typical during previous expansions. The chairman and other Fed officials have indicated that they see that range as low enough to support faster growth and hiring.

Investors, however, are increasingly betting that the Fed will feel compelled to cut rates later this year, likely out of concern that the U.S. will feel the impact of a global slowdown stemming from the coronavirus. The chances of a cut by September’s Fed meeting have risen above 70%, according to the Chicago Mercantile Exchange’s FedWatch tool, up from roughly 40% just a month ago.

Still, Paul Ashworth, chief U.S. economist at Capital Economics, said he saw nothing in the Fed’s statement or at Powell’s news conference to make him change his belief that the central bank will keep its benchmark rate unchanged for the foreseeable future.

“Unless the U.S. experiences its own epidemic, we doubt that the indirect effects from the disruptions in China would be enough to warrant a U.S. rate cut,” Ashworth said.

The coronavirus has in effect shut down much of that nation and seems sure to slow the Chinese economy — the world’s second-largest — which had already been decelerating. The virus has now infected more people in China than were sickened in the country by the SARS outbreak in 2002-2003.

Major companies across the world have responded to the virus by suspending some operations in China. Starbucks said it plans to close half its stores in China, its second-largest market. British Airways has halted all flights to China, and American Airlines suspended Los Angeles flights to and from Shanghai and Beijing.

Hotels, airlines, casinos and cruise operators are among the industries that have suffered the most immediate repercussions. Apple CEO Tim Cook said the company’s suppliers in China have been forced to delay the re-opening of factories that have closed for the Chinese New Year holiday until Feb. 10.

The Fed’s statement, which its policymaking committee approved 10-0, was nearly identical to the one it issued in December, though this time it described consumer spending as rising at only a “moderate” rather than at a “strong” pace. That change likely reflects relatively modest spending by Americans over the holiday shopping season.

The statement also signaled that the Fed wants inflation to move higher. The Fed’s preferred measure showed inflation rose just 1.5% in November from a year earlier, below its 2% target.

“We’re not comfortable with inflation running persistently below” the Fed’s objective, Powell said. The Fed seeks inflation at that level as a cushion against deflation, a destabilizing drop in prices and wages.

Last year, the Fed cut its benchmark rate three times after having raised it four times in 2018. Powell and other Fed officials credit those rate cuts with revitalizing the housing market, which had stumbled early last year, and offsetting some of the drag from President Donald Trump’s trade war with China.

On another topic, Powell said the Fed will continue its purchases of six-month Treasury bills to ensure that short-term lending markets operate smoothly. The Fed began buying $60 billion of the bills each month in October to expand cash reserves that are available for overnight lending, after a shortage of reserves caused overnight rates to spike. The lending squeeze also pushed the Fed’s benchmark rate out of its target range.

The Fed plans to continue its purchases until the second quarter, Powell said, while it slowly draws down some temporary lending it has also done to boost short-term lending markets.

Powell said the overall economy, not just Wall Street, has benefited from the Fed’s bond-buying because it’s enabled the Fed’s low-rate policy to reduce mortgage rates and other consumer borrowing costs.

“That really is important for the public,” Powell said.

The Fed’s decision came a day after Trump, in a tweet, again pressed Powell to cut rates, arguing that this would make U.S. interest rates “competitive with other Countries.” Yet the Fed hopes to avoid the ultra-low and negative interest rates that exist in much of Europe and in Japan, which they — and most analysts — see as evidence of weak economies.