Fauci Lies in the Senate 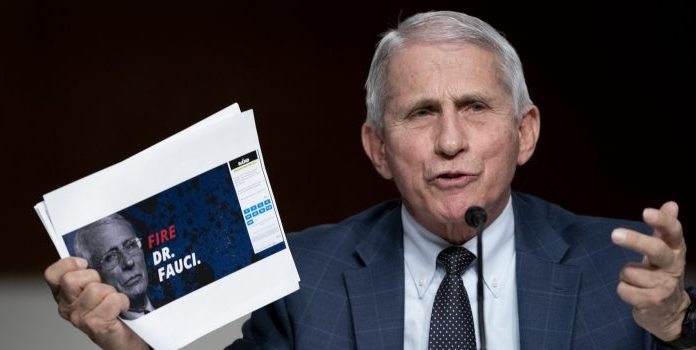 (American Institute for Economic Research) Dr. Anthony Fauci offered some unhinged testimony before the Senate yesterday, and while his calling Kansas Senator Roger Marshall a moron on a hot mic got most of the ink, his exchange with Senator Rand Paul was the real lowlight. There just seems to be something about the limelight that forces Fauci to take leave of his senses.

So what was it this time? Easy. It was when Rand Paul asked him if he thought it “appropriate to use your $420,000 salary to smear scientists who don’t agree with you?”

Fauci predictably denied the charge, but just about anyone with an ounce of sense could likely guess he was lying. Alas, there is no need for guesswork. An American Institute for Economic Research Freedom of Information request makes it plain: Fauci absolutely used his government position to smear any number of people with whom he disagrees.

To be clear: We have the emails proving the charge he denied. But don’t take our word for it, you can read them yourself here.

Fauci has been drawing a salary at the expense of the American taxpayers since 1984, when he became the director of the National Institute of Allergy and Infectious Diseases and Chief Medical Advisor to the President of the United States. It was from this position that he became the voice of the federal response to Covid-19.

On near-daily TV interviews, he has implored Americans to “follow the science.” What does that even mean? To him, “the science” seems to be whatever he says it is. Lest there be any doubt, he has addressed those who would dare second guess him, saying “It’s easy to criticize, but they’re really criticizing science because I represent science. That’s dangerous.”

And if that’s how he acts publicly, his behavior is worse when he steps away from the camera’s perpetual glow. So back to the aforementioned FOIA request. Things got interesting when Fauci emailed Francis Collins to discuss the Great Barrington Declaration, which called for a pandemic approach based on focused protection rather than lockdowns. We covered the contents of the emails and made them freely available to anyone interested enough to click a link. If you passed by said link above, here it is again.

The emails show how Fauci and Collins, rather than engage with epidemiologists from Harvard, Oxford, and Stanford, colluded instead to smear them in the public press, with Collins calling for a “quick and devastating public takedown” of the Great Barrington Declaration,

Fauci responded to Collins that very night, writing, “I am pasting in below a piece from Wired that debunks [the GBD],” to which Collins responded, “Excellent.”

The emails quickly made the rounds, and they reveal Fauci’s modus operandi. He speaks “the science” to the public while working in private to stifle dissenting views.

Which brings us to yesterday’s interaction between Fauci and Rand Paul. The Senator asked:

In an email exchange with Dr. Collins, you conspire, and a quote here directly from email, to ‘create a quick and devastating published take-down of three prominent epidemiologists from Harvard, Oxford, and Stanford.’ Apparently, there are a lot of fringe epidemiologists at Harvard, Oxford, and Stanford. You quote in the email from Dr. Collins and you agree that they are fringe.

Fauci responded to the granular detail rather than the elephant standing on top of it, saying:

The email you’re referring to was an email of Dr. Collins to me… There you go again. You just do the same thing every hearing…You are incorrect as usual, Senator. You are incorrect in almost everything you say.

Except he wasn’t incorrect at all. And we have the emails to prove it. And if you missed them twice above, you can find them right here.