Democrat Who Sponsored Police ‘Reform’ Gets Carjacked in Philly 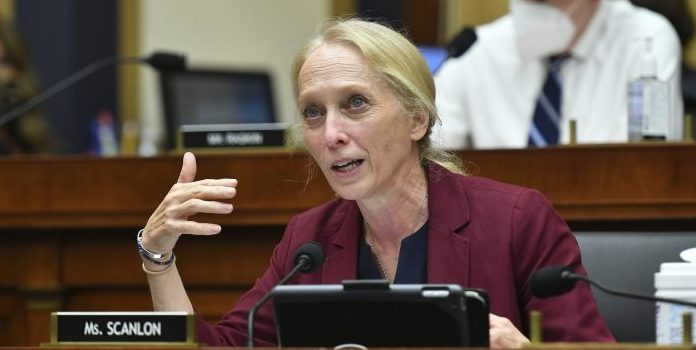 (Headline USA) Five suspects were in custody Thursday after being found in a vehicle stolen at gunpoint in Philadelphia from U.S. Rep. Mary Gay Scanlon, Delaware State Police said.

It was the second reported carjacking of an elected Democrat in 24 hours as the wave of violent urban crime that the Left tacitly—if not overtly—encouraged during the Trump administration comes home to roost.

Illinois’ Democratic state Senate Majority Leader Kimberly Lightford and her husband were carjacked on Tuesday night in a Chicago suburb.

Ironically, Scanlon was one of the sponsors of a recent police “reform” bill in the House, Fox News reported.

Despite the diminished capabilities of a weakened police force, her elite status gave her the opportunity for closure that few crime victims in major cities now enjoy.

State police said the suspects were being processed. Their names have not been released and no other details were available.

Scanlon, D-Pa., was walking to her parked vehicle after a meeting in FDR park shortly before 3 p.m. Wednesday when two armed men demanded her keys, police said. She handed them over and one drove off in the blue 2017 Acura MDX while the other followed in a dark-colored sport utility vehicle, police said.

“I am relieved that Congresswoman Scanlon was not physically injured, and my thoughts are with her during this difficult time,” Police Commissioner Danielle Outlaw said in a statement, vowing that police would provide any support needed.

Scanlon, whose district includes portions of south Philadelphia and neighboring Delaware County, was among elected officials meeting to discuss constituent concerns around ongoing development plans for the park, the Philadelphia Inquirer said.

Her office said Scanlon expressed gratitude to city police for their quick response and to her local police department and the Sergeant at Arms in Washington, D.C., for working with Philadelphia police “to ensure her continued safety.”

Mayor Jim Kenney said he was “appalled to learn of this violent crime” against the congresswoman, whom he described as his friend and colleague.

“My thoughts are with her during what I’m sure is a traumatic time,” he said in a Twitter post.

“Everyone deserves to feel safe in our city, and sadly that hasn’t always been the case this year,” Kenney said. “It’s disheartening and infuriating that criminals feel emboldened to commit such a reckless crime in the middle of the day in what should be a place of peace—one of our city’s parks.”

Adapted from reporting by the Associated Press